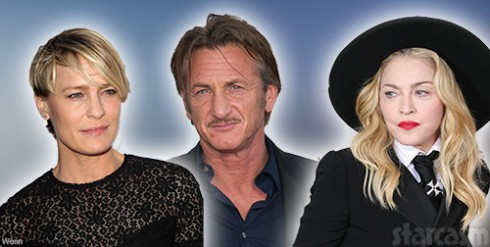 It’s no secret that Sean Penn and Charlize Theron are hot ‘n’ heavy ‘n’ very quickly working toward marriage. And love like that can make a person say and do some crazy things, such as forget he was married twice before.

“You say I’ve been married twice before but I’ve been married under circumstances where I was less informed than I am today,” Sean said in a new interview with Esquire U.K.. “So I wouldn’t even consider a third marriage, I’d consider it a first marriage on its own terms if I got married again. I mean, I like the tradition.”

You know why Sean can say with confidence that he “likes the tradition” of marriage? Because he’s been married twice before, making his potential union with Charlize his third, not first, marriage.

Sean eventually went on to acknowledge his two ex-wives, Madonna (1985-1989) and Robin Wright (1996-2010)… Although I still detect some shade being thrown at Robin, the mother of Sean’s kids Hopper and Dylan. Here’s what he said: “I’m very friendly with my first ex-wife. I would say that I’m on extremely good terms with the children I share with my second ex-wife.”

He did have much kinder words for his new love, Charlize.

“I’m surprised to be in love. Lot of reasons. I’m self-proclaimed bad at mathematics but I can do two plus two: 53 years old plus finally beginning to figure out why you haven’t been happy in a single relationship? It could seem too late,” Sean said, suddenly turning romantic. “To run into somebody now who you care about is a much passionate, deeper, truer and — God! — a much happier feeling. It’s a lot more romantic and a lot more fulfilling to be in a relationship and to think you’re a good person within it.”

Sean is reportedly in the process of adopting Charlize’s son, Jackson, and sources say they are considering adopting another child together.