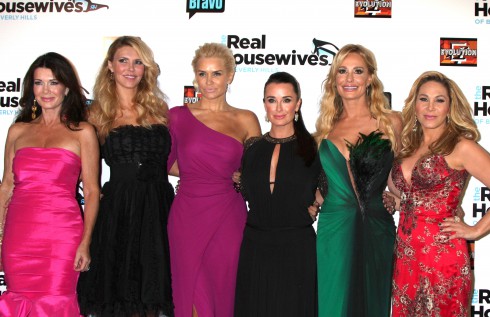 Real Housewives of Beverly Hills is currently airing its third season but in just a couple months, filming will begin on Season 4. As always, there will be plenty speculation as to who will come and who will go, and the rumors have already started — beginning with Taylor Armstrong and Penny Lancaster.

According to E! News sources, Taylor is on her way out and producers are in talks with a few other possible wives including Rod Stewart’s wife Penny Lancaster. Ironically, Penny already has ties to the cast. Very odd ties. She is the 41-year-old step mother of 31-year-old Adrienne Maloof’s boyfriend, Sean Stewart. How priceless would the scene where Sean introduces Adrienne to his step-mom be? Can you even begin to imagine what Brandi Glanville would have to say about that?!? 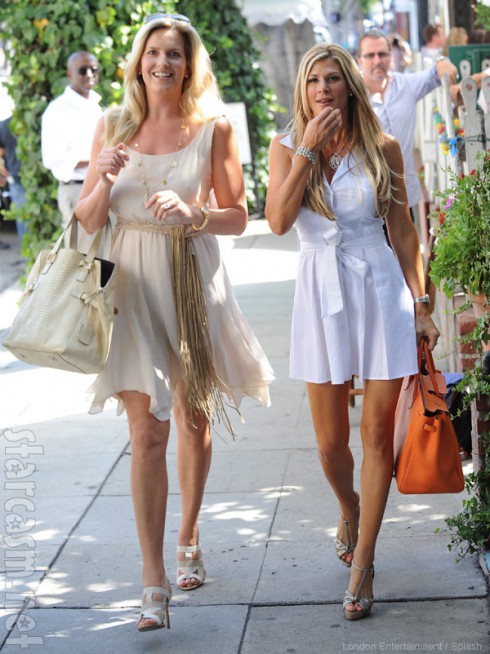 Last August, Penny sparked rumors that she was joining Real Housewives of Orange County when she was spotted with Alexis Bellino and a filming crew (above), but it turned out that she was just interviewing Alexis for her own ITV morning show, Lorraine.

E! says that so far none of the ladies have been officially asked back, but since contracts go out at least three weeks before filming begins, they’ll know something in the next few weeks. The site also says that Taylor is completely unaware of any possible recasting of her spot. “Producers are looking at other options,” the source explains, “They feel like Taylor’s storyline has become too dark and they need to shake things up a bit.”

In addition to Penny, producers have reportedly been “talking to quite a few new people,” including a woman whose family owns the high-end L.A. seafood restaurant Crustacean. “There are also discussions about Faye Resnick possibly coming onboard as a full-time member.”

One thing is for sure, if Penny does end up joining the cast, things are bound to get a little awkward. Since she’s been with Sean’s dad for so long, she’s likely a mother figure to him, which as we mentioned before could make for some genuinely cringe-worthy — albeit entertaining — moments with Adrienne. Plus, I would probably shell out actual money to watch Rod Stewart and Lisa’ husband Ken Todd hang out!