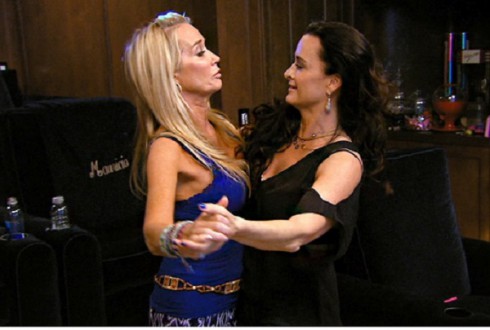 Evenin’, Real Housewives of Beverly Hills fans! Don’t be fooled by the appearance of Taylor Armstrong and the mention of Adrienne Maloof–this is indeed season 4. Let’s get to the numbers.

1: Number of episodes we had to sit through until the reappearance of Yolanda Foster’s cleanse. Last season, she was seen trekking up mountains to fetch her own lemons from the trees; this season, her housekeeper is carefully pouring it into Fiji water bottles for her. My, how times have changed.

3: Number representing the grade Carlton Gebbia’s daughter (Destiny? Mystery?) is in. Parents, chime in: does she get a pass on not knowing this because she has two other kids? Please note that Cross is not yet in school (and therefore is not old enough to hate his parents for naming him Cross).

3: Number of minutes we’d last on David and Carlton’s boot camp training ground. The swings are not for swinging, kiddos. They’re there to teach you how to run tight circles around any woman who would dare challenge the authenticity of your Birkin bag.

6: Number of seconds we lasted before slightly tearing up over Yolanda’s Lyme disease segment. It was also nice to see David Foster acting like a regular, concerned husband, as opposed to, say, a slightly psychotic piano-playing party host (season 3 reference to anyone new here).

2: Number of reasons Brandi Glanville’s dad has for not speaking with her. And they are: breast implant one and breast implant two. (At least, that’s how it came off by her explanation.)

4: Number of times Taylor Armstrong retweeted messages today promoting her appearance on tonight’s episode. We’re not sure whether we admire her restraint or if those are all the tweets she could find.

10,000: Approximate number of times it occurred to us during those lighthearted Dancing With the Stars celebration scenes that it what lies down the road is really, really sad (though that doesn’t necessarily mean we won’t enjoy watching it all unfold!). 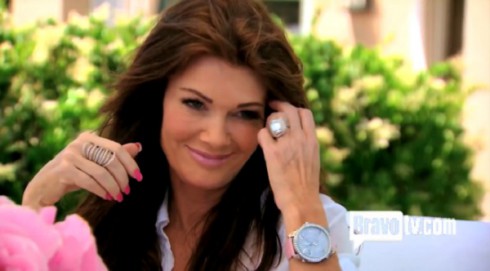 7 million: This is the number we’re choosing to represent how awesome it was when Kyle Richards’ friend showed up to lunch and she wasn’t Faye Resnick (or Faye Rancid, as Lisa put it. Did Andy Cohen hear our prayers?!)

9: Number on a scale of 1-10 of rudeness Kyle achieved when she interrupted Carlton’s (admittedly slow-moving and disturbing) story about her cat catching a bird in its mouth, or something to say she was going to go open some wine. And we thought Beverly Hills was filled with fake nice people!

47: Approximate number of minutes Joyce Giraud’s story about how she met her husband lasted, according to Carlton, who is the last person who should be complaining about awkwardly-told stories! (Still, to her credit, she stayed quiet and listened). 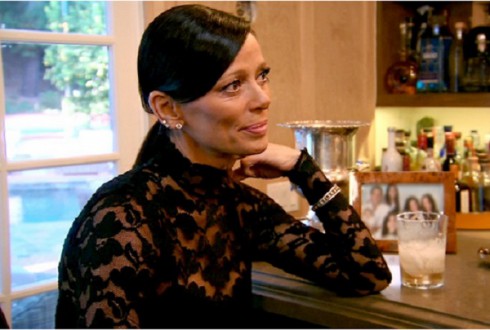 0: Number of reasons Lisa, Brandi and Yolanda have for thinking Carlton has a sense of humor. We guess leaky boobs and snorting laughter are too low-brow for her.

10: Number of minutes Kim Richards left the dog trainer outside while she yapped on the phone. On second thought, he probably should have just stayed out there. Did that little fight scare anyone else half to death?

5: Number of seconds Kim and Kyle feign concern for Lisa when she faints on Dancing With the Stars. 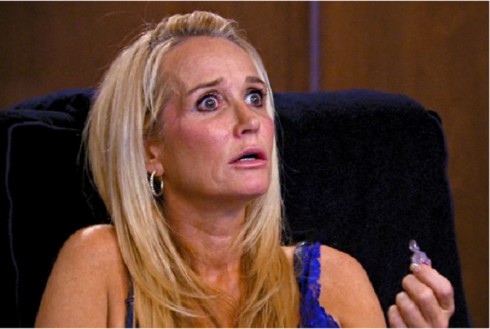 2: Number of times we laughed out loud during this episode. First, after Carlton’s flat-out “No” when Joyce asked if the ladies could remember when they were little girls dreaming about their perfect man. Then, during Ken Todd’s bumbling reply to Lisa saying she was due to get kicked off Dancing With the Stars.

That’s a wrap, RHOBHers. What did you think of this episode? Do you think Kim will ever get Kingsley trained? Is Carlton going to put a curse on all the ladies when they go to her American Horror Story-like manse next episode? Were you laughing or disgusted when Kim and Kyle reenacted Lisa fainting in Kyle’s theater room with her stupid labeled chairs? Till next week!