According to a criminal complaint released by federal authorities on Tuesday, Illinois Governor Rod Blagojevich is in all kinds of trouble for allegedly trying to profit from his office, including an attempt to “sell” Barack Obama’s empty Senate seat.

Illinois, and the rest of humanity, is no stranger to political corruption – what is so amazing about Blagsonofavich is his brazenness! Not only did he discuss the deal openly over the phone in profanity-laden tirades, but a starcasm reporter has just discovered the governor’s eBay seller’s page! WOW! $6 million to be a senator? Campaigning is for chumps! (Maybe Blagojevich should see if someone is auctioning off some discretion) 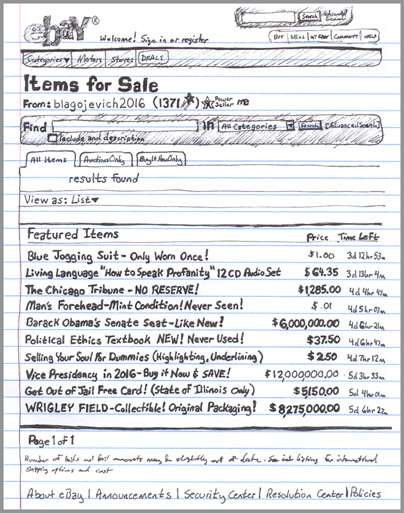