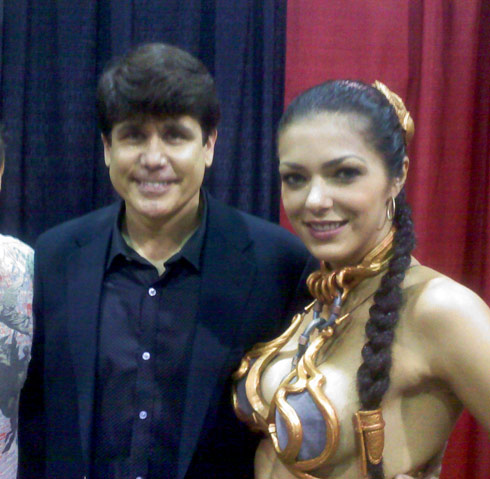 Just days after a jury found him guilty on only one of 24 counts (for lying to federal investigators), the second most famous black-helmeted character in the universe made an appearance at the 2010 Chicago Comic-con signing autographs and taking photos for cash. Reportedly, Blago was a huge draw at the convention and was charging $80 per photo and $50 for an autograph!

But I’m guessing at least one person that got a photo for free was slave-bikini-wearing Princess Leia! This superfine piece of Alderaan on Earth is model Adrianne Curry, who is a huge Star Wars fans and shows her affinity by attending conventions and Sci-Fi themed events dressed as Leia or sometimes a sexified Imperial officer. She tweeted the above photo of herself and Blagojevich on Saturday.

It may seem an unusual pairing to some, but it’s not so surprising considering Blagojevich tried out for, and almost got the part of Han Solo! Our starcasm researchers were able to unearth this rare photo of what our favorite galaxy far, far away may have looked like: 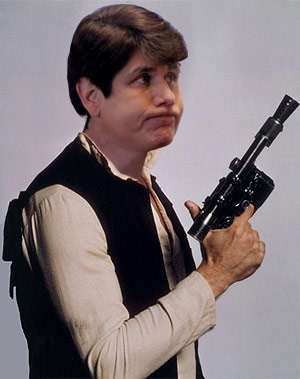 You might remember Adrianne as the winner of Season One of America’s Next Top Model or as the wife of Peter Brady actor Christopher Knight. Unfortunately, she also recently made headlines when she was attacked after leaving “Star Wars Celebration V” in Orlando on August 15th by a drunken man who reportedly put his hand up her skirt and repeatedly tried to force his way on her until police officers arrived and arrested him. Adrianne was dressed as Leia at the time. CLICK HERE to read about the attack and the ridiculous reaction from folks claiming she somehow deserved it! (There are tons of Adrianne Curry Princess Leia photos so the cloud of article does have a silver lining!)

Here’s a video of Blagojevich at the convention from NBC featuring some sarcastic upstaged celebrities also in attendance:

“I didn’t really get any money from any of the photos I took, because I took probably hundreds of them and couldn’t bother to ask anybody for any money for that. Those were free,” Blago told Fox News Sunday. “I did sign some signatures. I was there because I was invited at the last minute by the promoters, and it was an opportunity to get out there among the people.”

We have some questions about Kanye West’s Star Wars houses