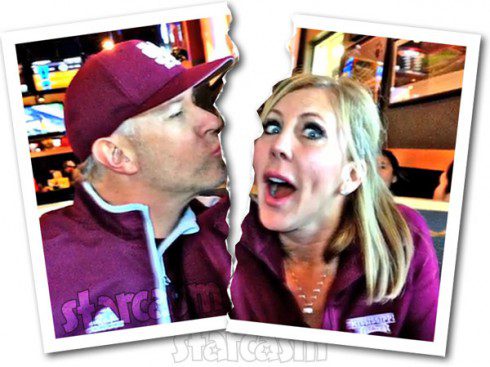 In a bit of a Bravo crossover Real Housewives of Orange County OG star Vicki Gunvalson says that she relates her past relationship with Brooks Ayers to the true crime story Dirty John, a podcast Bravo is adapting into a TV show starring Connie Britton and Eric Bana. Vicki definitely has a point, there are some eerie similarities between Brooks Ayers and the story of John Meehan.

The gripping Dirty John podcast follows the tale of Debra Newell, a highly successful 59-year-old Orange County, California interior designer. She was divorced and thought she found the companionship she yearned for in John Meehan, a handsome and charming man who claims he’s an anesthesiologist.

People around Debra, including her kids, saw holes in John’s autobiography, but Debra believed in him so much she was blind to the glaring suspicions. Instead of going to work everyday, he would hang out at Debra’s house and wear the same dirty, scruffy scrubs day-in and day-out – hence the name “Dirty John.” Of course, the Dirty John story if filled with twists and turns: there’s a lot more to John’s devious behavior and secret background than lying about being a doctor (as if that’s not enough to raise some eyebrows.)

Much like Debra, Vicki is a successful, self-made Orange County woman who dated a man with some questionable stories about himself. Not only were Vicki’s kids and friends suspicious, but she had an entire reality TV audience trying to point her attention to the massive heaps of red flags popping up about the guy.

The new promo for the Dirty John adaptation, which airs sometime later this year, ends with the message “He could happen to you.” Vicki feels like she’s a testament to this. “The truth always comes out,” she says. “Karma is a b!tch, baby.”

“I’ve gotten a lot of letters from . . . women saying what a sociopath, was a narcissistic man is and our stories were exactly the same. The love letters, the flowers, the ‘Baby, we got this, they’re the enemy,’ you know, really shielding me from my safe people which was my daughter, which was my cast members who loved me,” Vicki says.

On the show Brooks often made a point to send Vicki a lot of cheesy, sentimental cards to prove his love. While there’s nothing wrong with sending people you love cards and trinkets, sometimes this behavior can be done as a stand-in for love instead of love itself. There’s a term for this when it comes to narcissistic behavior: love-bombing.

It’s a practice that’s more about manipulation than true feelings – the love-bombing seeks to overwhelm their target with signs of affection, with flattery, in order to play with their emotions and, in many cases, to isolate them from others in their lives.

“Dirty John, that is my life. He portrayed he was somebody he wasn’t. That happened to me, and we’re intelligent women,” she says. “It happened to me with my eyes wide open . . . So if it can happen to me, can you imagine how many women it’s happening to? And I’m a smart cookie. Everybody told me he was a bad boy, and I didn’t see it till it was over. I guess I can’t say ‘Listen to me’ because you can’t listen to anybody when you’re in it. You gotta really trudge through it.” Brooks famously faked cancer, including faking chemotherapy and the side effects of chemotherapy.

Vicki also says that she thinks her daughter Briana might have attacked Brooks if she had gotten the chance to, a situation that would really align with the Dirty John story.

PHOTOS Tamra Barney explains why she had her breast implants removed