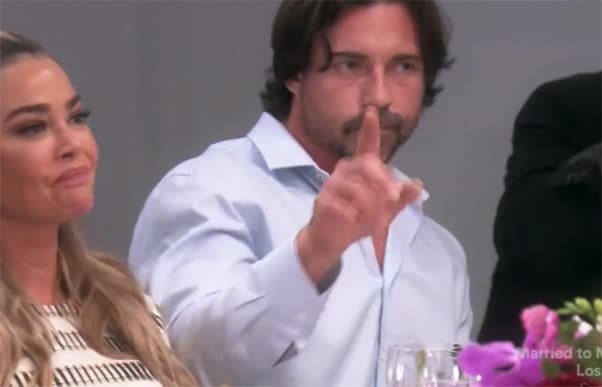 Everything you know about how disease process and stuff works is not true. – Aaron Phypers

What does Aaron phypers do for a living? On Wednesday night’s episode of Real Housewives of Beverly Hills, Kyle threw a “Welcome Home” dinner party for herself after wrapping up the film Halloween Kills. Unfortunately, the part started with tears when Sutton insulted Teddi Mellencamp instead of complimenting her during a complement game. The night proceeded to get even more awkward when Kyle asked Denise Richards’ husband Aaron Phypers, an actor who now runs a holistic healing business in Malibu, to explain what he does for a living.

Aaron worked at a company called Q360, which promised to help clients suffering from injuries and disease heal with the help of energy fields.

Aaron started off his monologue with a statement that stunned the table:”Everything you know about how disease process and stuff works is not true.” He goes on to try to explain a view of cancer and injury that is very different from the models of modern medical science.

“I have to be careful,” he went on. “Age of 12 I was living next to the largest nuclear facility in North America. I watched everyone die of cancer. I couldn’t understand how we could split an atom with sound and cause a nuclear explosion. If you look at an atom, there’s lots of space . . . 99% is space but it’s oscillating at a frequency that appears to be real in our reality.”

The dinner party quests show looks of puzzlement, but are generally following Aaron at this point. “Traditional isn’t traditional,” he continues. “it’s allopathic, and allopathic, it means alternative medicine. Look it up. It’s all a measurement of the electromagnetic spectrum frequency.”

“I break down stuff so you can all heal you,” he says about what he does. “I don’t heal anybody, by the way, I remove blocks, discord, information.”

In the interview chair, Lisa Rinna reveals that her husband has been involved in fusion energy for 30 years. “I know a lot about it,” Lisa says. “And I’m trying to wrap my brain around what Aaron is saying.”

Aaronthen tells the group that he ruptured his achilles tendon and regrew it in two months without surgery. Garcelle is obviously finding this testimonial hard to believe. 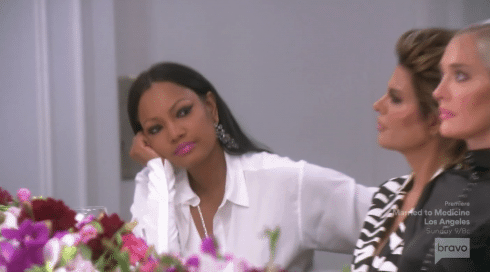 “There’s cancer in every one of you right now. Cancer happens all the time,” he explains.

It’s then that Denise and Aaron reveal that they have people following them. The show cuts to footage from three days ago when they were driving and saw a “weird car,” they think they’ve been seeing everywhere.

“Aaron has a job where people get tremendous results and sometimes certain organizations don’t like to see those results because they make a lot of money otherwise, and there’s times we’re followed,” Denise says in her interview.

“Do you want to know why cancer comes in?”  Aaron continues. “Because it’s protecting you of infection your immune system did not respond to and you would have died in 12 hours. It’s your best friend that protected you from somebody that’s gonna shoot you in the head with a bullet. That’s what cancer is . . . I’ll prove it all day long.”

Erika Jayne is another party guest that doesn’t seem to buy Aaron’s claims. “That’s fascinating Dr. Aaron. Oh wait, you’re not a doctor. You don’t even play one on TV,” she says in interview.

“We can split an atom with sound, cause a nuclear explosion, kill people? You can’t figure out what’s cancer?”   Aaron rhetorically askas.

Lisa asks him to explain the common cold, and instead of doing so, he retreats. “You have no idea what I really do,” he says.

“I have an idea,” Lisa replies. At this point Denise shuts down the conversation, telling Aaron they have to think of their safety.

Denise actually met Aaron Phyphers at his facility Q360, where she was seeking “DNA repair,” and antiaging services. “Then, one time we had sex in one of his rooms,” she told US Weekly about how their romance start. “We’ve been inseparable ever since.”


At the time of the dinner party episode, Aaron’s wife Denise Richards had just undergone surgery to correct four hernias. In her recovery process she appeared to be foregoing using her prescribed painkillers and was instead using herbal remedies to deal with the post-surgery pain. Several times on camera she explains that she is still feeling a lot of pain, including when someone asked her how she was doing at the dinner party.

He has previously compared what he does as “light and sound therapy.” He explained that just like how Ella Fitzgerald’s singing can break a glass with sound frequency, they can use frequency to “break down different things going on.”

Did Joanna Krupa cause Yolanda Foster’s divorce from Mohamed Hadid?