Teresa Guidice lost her arch nemesis Danielle Staub from the cast of Real Housewives of New Jersey, but the show’s producers used their magic to pull not one, but three antagonistic rabbits out of their hats to make up for it. The rub is they’re all related to Teresa (brother Joe Giudice, and his wife Melissa are joining the show, along with Teresa’s cousin Kathy Wakile), and Teresa had to find out from the media and Bravo, not the family members themselves that they were on the show. Throw that in with the stress of spending money like it’s growing on trees planted outside your over-sized, ornate house and then finding out that your husband had been lying about the state of your finances, forging your name on legal docs, filing for bankruptcy behind your back, and committing fraud; it’s really a wonder Teresa isn’t in a mental institution somewhere. Fame is a powerful drug. 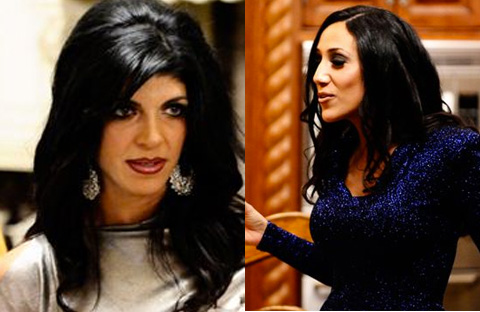 And Teresa just can’t help taking more hits of it. Considering that, the “bright side” is that all this drama gives Teresa a reason to flip a table, or Andy Cohen, in a blind rage. But the bad parts, of course, are emotional turmoil, rifts within a family, and various unresolved traumas. The worst part is probably the fact that their children have to witness all this nastiness between the adults in their lives. As Teresa told E! Online in her own words “It’s really sad. I cry a lot.”

The public first caught a glimpse of the drama in Teresa’s family when nemesis Danielle Staub riled Teresa up during last season’s Real Housewives of New Jersey reunion by asking Teresa “Did you acknowledge your nephew?” We later found out she was referring to the baby son her husband Joe had with his wife Melissa Gorga, and even if Teresa hadn’t yet “acknowledged” him, she soon would at a hellacious christening ceremony. Watch the full video of that emotionally draining and violent night below. Teresa and Joe’s dad almost has a heart attack, and everyone at the christening party for the little baby is terrorized:

According to their Facebook pages, the sisters-in-law have been also been in a bitter tiff over cookies, and Cookiegate will play out as a storyline. According to Melissa’s post, Christmas 2009 Melissa brought some cookies from an Italian to Teresa’s house, and she told Melissa that she threw them out because she thought they were from the A & P Supermarket, and because she didn’t like them. She went on:

“I should have said, ” Well they are better then the NOTHING THAT YOU BRING TO MY HOUSE EVERY EASTER!! How can someone be so rude, and always want to attack someone else, what could it be, HMMMMM! I think I might know but I wont go there. I think some people need to come back to plant earth, Oh I forgot, she also let everyone know Last night, AND I QUOTE ” I AM A CELEBRITY” I’ve been quiet for so long but now you’ve pushed me right over the edge! RIGHT OVER IT!!

Later, on the show, Melissa brings MORE cookies to Teresa’s house for Christmas, and from the promos, we hear Teresa say affectedly “I LOVE those cookies!”

Melissa, who is just as spoiled as Teresa (maybe more so, but she admits it) and lives in a 15,000 sq. ft. ostentatious mansion, continues to not mince words about her sister-in-law: “That bitch will never miss a party, especially if someone else is paying for it.”

But Teresa claims that Melissa is just copying her! She gossiped about her sis-in-law in her newest cookbook Fabulicious: “Do I wish my baby sister-in-law didn’t copy everything I do down to the shoes I wear and the chairs on my front porch? Of course!   “But you know what they say:  “You can’t pick your family.” Because, as we all know, cookbooks aren’t for recipes and cooking tips, they’re for dishing dirt on our enemies and family (In her previous cookbook, Skinny Italian, Teresa gabbed about Danielle Staub.)

According to Teresa, she didn’t even know that her sister-in-law and cousin Kathy were going to be on the show at all until she (likely) heard from the media, and then from Bravo.

One thing’s for sure, it’s going to be a wild ride of a season!
Teresa claims that she used to have a wonderful relationship with her brother, but cousin Kathy says that the two siblings have a lot of unresolved issues that go way back. Kathy notes on the show “It’s about not communicating what you’re truly feeling when you put those emotions away and you don’t discuss them.”

Here’s Teresa and her brother Joe when they were young and not sparring on television: 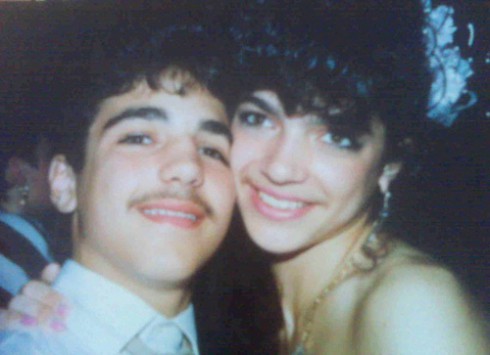 Whose side are you one?customer surveys