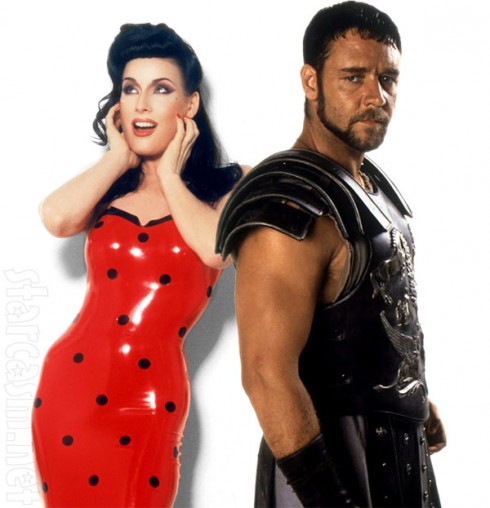 Russell Crowe appears to be wasting no time getting back in the dating game after splitting with his wife of nine years, Danielle Spencer. The actor has been spotted with a couple different women since calling it quits with Danielle in October of last year, but the one that seems to have really caught his eye is burlesque dancer/pin-up model Dita von Teese!

According to the New York Post, Russell and Dita were spotted at the Four Seasons Hotel in Beverly Hills last month and even got a couple’s massage together in the wee hours of the morning.

Russell has made it no secret that he is a fan of Dita’s. She is one of the 65 people he follows on Twitter, and just last year he retweeted a message from her which read, “Dressage. Was measured for bespoke blk patent boots w/my name stamped on the heel . . . But under whose bed did I leave my Hermes riding crop?” Also around that time, he retweeted another message she wrote. “Giving airport security a lesson in garter belts this morning.”

My imagination is running wild! I envision Dita in leather with a whip asking Russell, “Are you not entertained? Is this not why you are here?” (I will refrain from a “gladiator” homonym joke.)

Before his alleged rendezvous with Dita, Russell was rumored to have been seeing Billy Joel’s ex-wife Katie Lee. A source told Page Six that the two had been spotted engaging in an “intense flirtatious conversation” at the Greenwich Hotel’s Drawing Room in New York City.

Of the Katie Lee story, Russell told fans, “As soon as I finish this job & can get home, my priority is to try to bring my family back together. These latest reports are false & cruel.”

Reps for both parties declined to comment on the nature of Russell’s relationship with Dita.