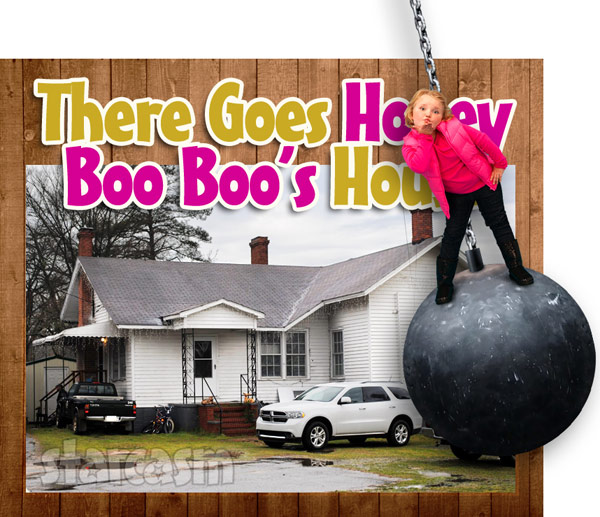 Reality television may soon lose one of its most memorable landmarks as the original Here Comes Honey Boo Boo house is scheduled to be demolished Monday.

As we previously reported, Mama June and the rest of the Honey Boo Boo family moved out of the McIntyre, Georgia home back in January, when they upgraded to nicer digs in Hampton, Georgia. The family’s former landlord hoped to cash in on their celebrity by offering the house for sale for $45,000, well above its previous selling price of $27,000 just five years prior.

But it seems being a reality show landmark did little to improve the property’s value. Now it is scheduled to be bulldozed tomorrow “to make way for more construction,” according to TMZ.

I will confess that I made a pilgrimage to the small town of McIntyre to see Honey Boo Boockingham Palace while on an east coast road trip, and I think I spent about $50 on gas at the gas station right down the street. Using me as an example, can you imagine the hundreds and hundreds of dollars the McIntyre economy is going to be missing out on?!

My guess is that TMZ will have video footage of the house being razed tomorrow. If so, and if it’s embeddable, we will try to update this post.

Until then, I’ll let Tom Waits end things with an overly dramatic farewell to this “House Where Nobody Lives:”