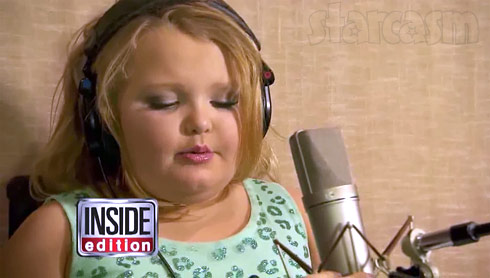 Mama June has been teasing that the family has some big projects in the works, with one of them being a reported new reality show. Late Monday night she revealed another project — a music video! Titled “Movin’ Up,” the song will feature Honey Boo Boo (of course), her sister Pumpkin and musician Adam Barta. (The preview clip is included below and set to autoplay, so that’s what you’re hearing.)

Inside Edition will be featuring some behind-the-scenes footage of the recording of the song and music video on Tuesday’s episode and released this teaser clip in which you can see Honey Boo Boo showing off her vocal abilities and her dancing skills:

There is no release date yet on the music video or the single.

UPDATE – The single will be released October 1, 2015, but the music video was released a few days early. Click the link to watch!

Meanwhile, I’m going to go out on a limb and speculate that the reported reality show that the family is working on is titled “Movin’ On Up” because Mama June is using the hashtag #MovinOnUp with her new posts. The show will reportedly have a Beverly Hillbillies theme (but judging from the hashtag, I’m thinking now more of a Jeffersons vibe? LOL! Mama June as Weezy?) and I assume will feature the family living in their new, much nicer home in Hampton, Georgia. So why not The Honey Boo Booverly Hillbillies?

UPDATE – Scratch that previous paragraph. GR Media responded to our post on Twitter and revealed the name of the song is “Movin’ Up” and not “Honey Boo Boo Bop.” We have since updated the title of this post.

Here are some more updates from Mama June from over the past week, during which time they recorded the segment mentioned above for Inside Edition as well as an episode of The Doctors (in which they reportedly address Honey Boo Boo’s weight issues and put her on a diet) and Entertainment Tonight. (Their new PR firm, GR Media, knows how to get some media attention!)

We have a AWESOME week out here in LA (CALIFORNIA)with the meeting we had BIG things in the works but ready to go home missing jellybean and ready to see jessica as she had school this wk and I been thinking bout the open house to college she has next wk getting scared and emotional but very proud of her as she will b the first to graduate ..and just FYI cause ppl think alana and pumpkin missed school this u r wrong henry county was out this wk and Monday but thanks for your concern school is #1 over anything we had alot meeting that went very GOOD will b able to share some of our EXCITING news hopefully later today or by Monday we r EXCITED about the events coming up and cause we will not b able to go Oscars sunday we will going to pre Oscars events b4 we fly out tomorrow this will b alanas pumpkin and sugarbears 1st red carpet event so they r excited wish we could go to the main event sunday but we have other things going on …and alana and pumpkin to get ready for school…
But to all our true supporters thanks for your continued support we love you and look for more updates and for haters we love yall too so for the ppl that like to screen shot go ahead oh and I forgot for ppl worried bout sugarbear he will b involved too as we r very civil we r getting along and he is been here through every meeting and cause I’m sure someone will say it NO we r not using him he CHOOSING to b a part of this with us…. ‪#‎newyear‬ ‪#‎leavingthedramabehind‬ ‪#‎nextchapterinourlives‬ ‪#‎movingonup2015‬ ‪#‎newadventures‬

Hey just wanted to tell everyone know we will b on some shows this wk and we will have a big announcement tomorrow alana and pumpkin r really excited and pumped bout it and we can’t wait to shared it with yall we first had a AWESOME time in LA alana got sang to twice by two BIG music artist at the academy awards gifting suite party Saturday and we had a great time at the BIG things in the future fun stuff the girls really want to do I can’t wait to share each thing lil by lil but we will b on inside edition tomorrow or Tuesday …entertainment tonight on Tuesday night. ..and the doctors Wednesday ….got more but as able to release things we will keep updated and plz keep the negativity off this post there is only bout 4 or 5 of yall but what y’all r talking bout is old news and our past and 7 mths old new so LET IT GO AND MOVE ON we don’t like drama on this as alana does read this page fr ok n time to time thanks like alana saying is here is we left the drama in 2014 and 2015 going to b a great yr but we appreciate our true fans that have been there through the up and downs and have forgave for mistakes as NO ONE is perfect this is page is to keep y’all updated on life moving past here comes honey boo boo and going into our new chapter in our lives and haters and trolls we love yall and them that screenshot go right ahead screen shot away and post away on uncle poodle page I would do it for but they have blocked us on the fan page and their personal page but we dont care we wish them the best of luck in life ….

Watch Katy Perry’s new music video for “Part of Me”