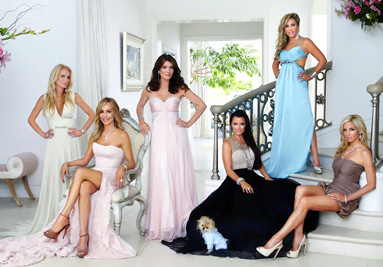 There’s been much speculation on how Bravo and Executive Vice President Andy Cohen would handle the upcoming premiere for the Real Housewives of Beverly Hills in the wake of Russell Armstrong’s suicide. Cohen made a statement to let viewers know the network was taking the issue very seriously and a cast meeting was held at Adrienne Maloof’s residence to discuss the issue and help the Wives cope with the sad event. All of this considered, there had been no word if there was indeed going to be a delay or a possible scratch of the entire season.

It appears as if this shell has been cracked as a very reliable source in the form of The Hollywood Reporter is stating that the premiere set for Sept. 5th will be pushed back at least one week and possibly longer. In addition there has been many on the inside encouraging Bravo to let it go and just not show the season at all. Their source states this is highly unlikely but that there will be considerable editing of the story lines involving Russell.

In additional news, TMZ’s latest on this exploding story is that Taylor Armstrong was beaten severely by Russell. He allegedly punched her in the face so hard that he, “cracked bones in her cheeks.” Their sources are claiming that the photos of the alleged incident are horrific. In addition, the report states that Taylor confided with cast mate Camille Grammer and upon discovering this Russell sent Camille a threatening email. This alleged beating happened before shooting of the show was to begin and the sources claim it delayed the show for weeks.

If this were true wouldn’t Bravo be complicit in this tragedy having the knowledge that Russell was allegedly extremely abusive to Taylor and that their relationship was so far out of control? On that same note family members of Russell’s are being critical of Bravo and his step-brother Wade Jackson is so outraged he stated that he’s considering a lawsuit against the network.

The end result here is that the season is still in limbo but in the least it certainly appears as if there’s going to be a delay while they work through this difficult and delicate matter.

PHOTOS Who is Hannah Hurwitz from “Pregnant in Heels?”