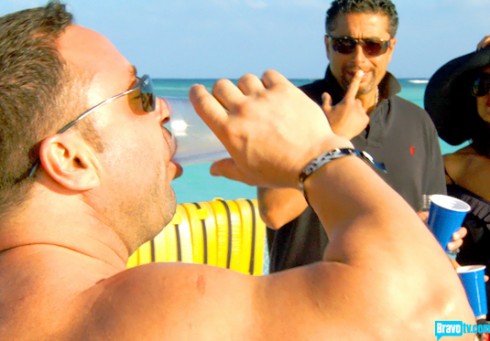 They were at a poker party when Rich and Joe started bickering about who was shorter. Then Bravo cut to the girls in the kitchen wondering why the guys were making so much noise. Fade to black.

We’re back at Joe and Teresa’s house, where Teresa swears she’s never seen a black eye or mark on Joe’s face for the eleven years they’ve been married, until now. “Because of that stupid geek I had to see something on your face.”

Here’s what happened, according to Melissa and Joe Gorga:

Melissa Gorga: “All I saw was Joe’s nose bleeding. What happened?”

Joe Gorga: “Joe was bustin’ chops again about height, and then Richie was like ‘Why don’t you stand up next to me?’ So Giudice went to grab Rich by the nuts.”

MG: “Why did Joe Giudice go to grab his balls?”

Interesting you ask that, Melissa! In an aside, Joe Giudice doesn’t’t give a reason, but he does point out that Rich didn’t have any nuts to grab. “He’s got pebbles for nuts, I mean he’s got no nuts at all.”

Joe Gorga: “No! Swung him with his body, like they were wrestling.”

Then, Chris Laurita weighs in with what he saw: “I saw them both go on the candle, and a big iron candlestick holder hit Giudice, and gave him a black eye.”

Rich is invigorated by the fight, even if it was the candlestick holder that truly injured Giudice. He tells the camera “Teresa thinks that I’m not strong enough because I don’t drive my pickup truck into trees, but I’m the one that accidentally gave her husband a black eye and a bloody nose!”