Krazy Kelly tells People, “Everybody deserves a second chance. If you’ve made a mistake in life, you have two choices, you can either sit in the Lazy-Boy and eat popcorn and talk about it, or you can get out and do something fun. And I think that’s what she’s doing. I like her courage.”

That’s brilliant stuff! People with a criminal past need to hear this kind of inspirational wisdom! This only iterates my belief that Susan Sarandon wasn’t the right choice for the role of Sister Helen Prejean in Dead Man Walking… 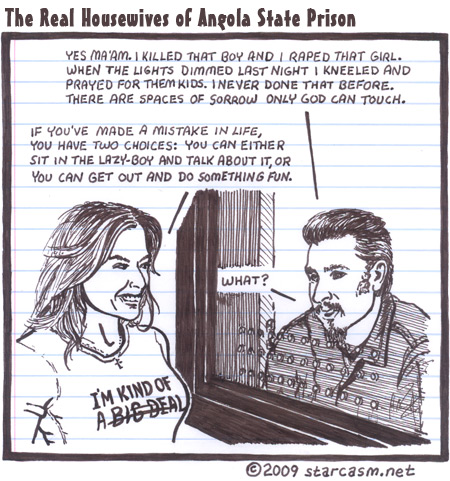 The People article also has some other “real housewives of New York City” offering their opinions on the Danielle Staub debacle, including the Countess with, “I think if I had that kind of a past, an arrest, if I had any skeletons in my closet, I don’t think I’d be on a reality show.”

****In case you’ve missed the headlines (or our numerous posts about it), Danielle Staub’s fellow cast members recently found a true crime novel that included a mug shot of Danielle from when she was going by the name Beverly Merrill. The book claims that Danielle/Beverly was arrested for kidnapping but pleaded out to a charge of extortion in addition to being heavy into drugs and leading a promiscuous life that included sleeping with over 1,000 men (by her own admission) before she was 23. Needless to say, the other housewives (who are all actually married) found the news to be a little unsettling, most of them agreeing that they didn’t want anything more to do with Danielle.

When confronted with the book, Danielle emphasized that these events took place almost 25 years ago and aren’t a part of who she is now (or something like that). Anyway – the event has stirred a good deal of controversy, most of which revolving around Danielle’s decision to go on a high-profile reality show with a criminal past and two young daughters.