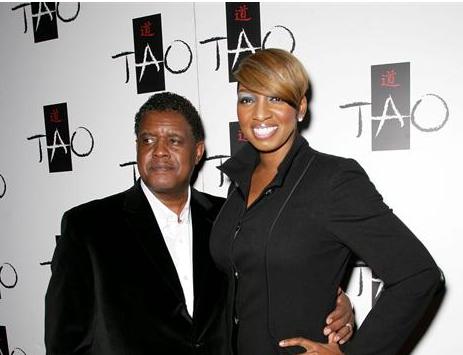 Gregg Leakes got caught by radio show host Corey King, on air, admitting that he’s trying to divorce Nene Leakes (real name Lenithia Bonita Smith) and wants her to pay him back the $300,000 he spent making her into a Real Housewives of Atlanta franchise star.

The pair have been coy to the media about the split (probably because it’s going to be a major plot point; RHOA season 3 cameras are rolling as we speak), denying rumors that they were divorcing, or that Nene was cheating on Gregg with NFL player Charles Grant (as first insinuated by Kim Zolciak on Watch What Happens Live).

Gregg blames the split on Nene’s head spinning from all of her fame, and thinking that she was something big, and needed a millionaire if she needed a man at all. (Her new nose probably isn’t helping her new attitude.) Gregg says they were going to fly to Jamaica to hash things out and figure out what they’re going to do, but he made it clear that he thought Nene would be nothing without the $300,000 he invested in her, and he wants the moola back.

Corey got Gregg to spill so easily because Mr. Leakes owes him some money. Gregg later told Kandi Burruss on her UStream show that he owes Corey just $100.

UPDATE December 2010, NeNe plays a bit coy with Essence.com about the current state of her marriage to Gregg, but it looks like the divorce might continue to move forward even though they are currently still living together:

We are still together. We are in the same house and we are still legally married. But that’s not to say we won’t be unmarried.

On New Year’s Eve 2011, Nene said that she was single for the New Year.

Are Sesame Street’s Bert and Ernie getting married?