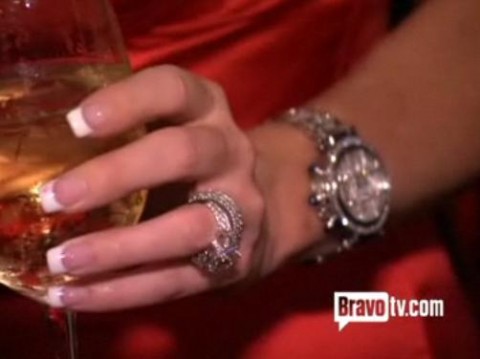 UPDATE: Kim has moved on from Big Poppa and is now reportedly engaged to Atlanta Falcons defensive end Kroy Biermann, her future baby daddy! CLICK HERE for all the deets, including a possible spin-off reality series?!?.

Last night on Real Housewives of Atlanta “Better Tardy Than Never,” Kim showed up to her birthday party with a giant rock on her finger, claiming that Big Poppa proposed! I’m not sure how you can be engaged to a man who’s still married, but in Kimberleigh Zolciak’s world, anything’s possible.

So, what’s the deal? Is this engagement for real, or is Big Poppa just playing along with Bravo’s storyline? The weird thing was when Kandi said Big Poppa showed her the ring when Kim was recording in Kandi’s studio, which means Big Poppa might be lurking around Kim just about every time Bravo films a scene.

Just this year Big Poppa (a.k.a. Lee Najjar) filmed an episode of MTV’s Teen Cribs with his wife Kimberly (he’s got a thing for Kims) and children by Kimberly, Jamen and Kaitlin. Now he’s proposing to Kim Zolciak? Maybe Big Poppa has just found two women who will put up with anything if they’re financially comfortable enough.

Watch Kim announcing her engagement below:

Apollo Nida apologizes to his sons before going to prison: ‘I’m sorry to be taken away from you’