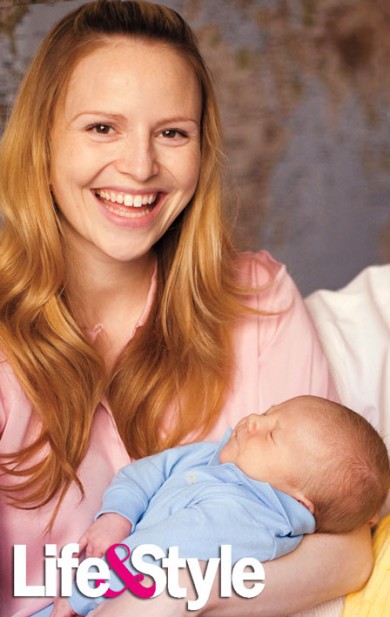 Former Baroness Rosie Pope details her life as a maternity concierge to rich Manhattan women on Bravo’s Pregnant in Heels, but while filming the show, she suffered from devastating feritility issues while trying to conceive her second child with husband Darron Pope.

Rosie was delighted to give birth to her first son J.R. in 2008, but when she tried to give J. R. a sibling, she found out she suffered from “secondary infertility.” Bascially, at age 28, Rosie’s body was no longer releasing eggs. Rosie told the latest issue of Life & Style that struggling with infertility issues “hits the core of what you think you’re supposed to be doing as a woman. It’s more difficult than you think.”

She started going through the nerve-wracking I.V.F. treatments, which did result in a pregnancy while she was filming the show, but the outcome was dire. Rosie experienced an ectopic pregnancy, which is a pregnancy occurring in the fallopian tubes, which is usually fatal for the mother if the pregnancy is not. Heartbreakingly, she had to end this pregnancy, which is stressful enough, but during this difficult time she also had to keep up her business, which was being filmed for a reality show. During the process, she had to have the fallopian tube removed, leaving her with only one, which only decreased her chance of getting pregnant.

Rosie also opened up about her harrowing experience with the ectopic pregnancy on her own blog. She was told that she might be pregnant, but the it was necessarily healthy. Then she had to go through the heart-wrenching experience of hearing her baby’s heartbeat and being told that the pregnancy was in her fallopian tubes, and had to be terminated. Instead of immediate surgery, they set her up to receive chemotherapy to stop the growth. Unfortunately, the drugs didn’t work, and the embryo continued to grow, risking Rosie’s life. They had to have an emergency surgery and removed one of her fallopian tubes.

Thankfully, a “miracle” of sorts occurred. She finally ovulated, and got pregnant naturally. The news was incredible, but the pregnancy still had complications. She had to be put on bed rest because she had placenta previa, a complication that involves the placenta staying very low in the uterus throughout the pregnancy. Throughout all the sturggles, Rosie gave birth to a very healthy 8lb. 8oz. Wellington “Wells” Reade on February 5, 2011.

Rosie gushes about her new son: “He’s the sweetest, easiest, calmest baby. He wanted to be here so badly. Every day I look at him and think he’s such a little fighter, because the odds were stacked against him. He just feels really special to me.”

CLICK HERE to find out more about Rosie Pope and her maternity empire.