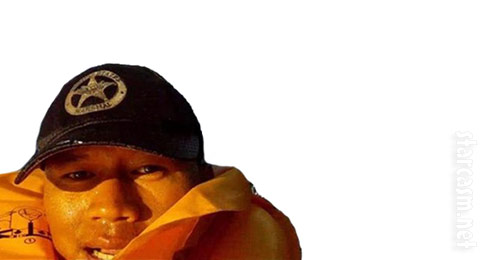 It’s the rest of the photo that tells the story!

Ferdinand Puentes, 39, was 1 of 9 passenger on board the Makani Kai Air Cessna that crash landed in the waters off of Kalaupapa, Molokai in Hawaii last month.

As the engines cut off and sirens blared, indicating the plane was going down, Puentes turned on his GoPro camera and took video footage of the horrifying ordeal. “As sirens and bells of the airplane were going, it was quiet. Everyone knew what was going on. Seeing the water coming up real fast, the splash down when we hit the water.”

Puentes told KHON that he was wearing “steel-toed boots, heavy work jeans, and long sleeve shirt. It was hard and exhausting to swim with all that.” The pilot, Clyde Kawasaki, gave him an extra seat cushion to stay afloat.

Before being rescued by the Coast Guard, Puentes managed to take the following selfie which shows him floating in the Pacific along with a stunning visage of the wrecked airplane’s tail end behind him.

I would be amiss if I didn’t mention that some on message boards via posts about this are claiming they feel the image is photoshopped. 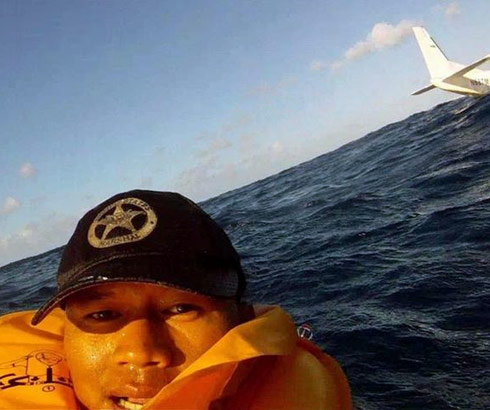 Of the 9 souls on board, 8 managed to survive. Hawaiian health official Loretta Fuddy, the woman who just so happened to have verified the authenticity of Barack Obama’s birth certificate – which created conspiracy headlines, perished.

Puentes’ actions highlight the astounding way things have so dramatically changed in relation to how the world gets its news. His incredible selfie reminded me of the photos taken by a passenger of the Asiana Airline flight that crashed in San Francisco. Within just a few minutes, the world had images via Twitter from the scene that were disseminated immediately across the internet and then later TV and other media outlets.

It truly is amazing times we’re living in when it comes to how we get our information.

Newlyweds killed in head-on collision with each other