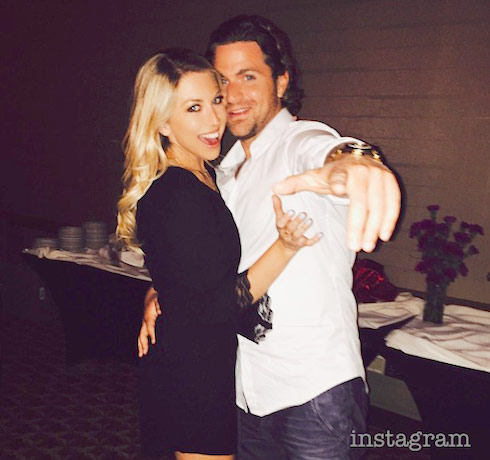 Despite what viewers have seen on recent episodes of Vanderpump Rules, the on-again-off-again relationship between Stassi Schroeder and her boyfriend, Patrick Meagher, is very much back on. The reality star confirmed the reconciliation last week on Watch What Happens Live, even referring to the elusive radio host as her boyfriend. While Stassi has talked openly on VPR about her relationship with Patrick, he does not appear on screen alongside the Vanderpump posse, leaving many wanting to know more about the mysterious man-bunned Meagher.

Hailing from Michigan–much like Stassi’s ex, Jax–Patrick is the former host of Cocktails with Patrick on Cosmo Radio and the current host of The Wrap on SiriusXM’s Mad Dog Sports Radio. Based on his Sirius host bio, he’s a “sports junkie who has no other hobbies” – although it’s mentioned that he talks pop culture and gambling on the show as well.

Unlike Stassi, Patrick’s social media gives a very sparse view into his personal life. His Twitter account, @TheWrap, consists almost exclusively of sports-related posts; and, while mentions of Stassi are noticeably absent, Patrick did tweet a photo of her dog in December…along with what seems to be an unrelated caption:

Patrick and Stassi’s relationship may be back on track now, but it’s unlikely that Vanderpump Rules fans will get to watch the rekindling play out on screen – T.V., computer, or otherwise. Aside from the occasional social media photo, the couple seems to prefer to keep the details of their romance private, including their current living situation. It’s unclear if Patrick and Stassi have since resumed cohabiting after deciding to live separately during one of their “off again” moments; however, it’s safe to assume Stassi didn’t continue shacking up with Kristen Doute any longer than she had to.

To check out The Wrap with Patrick Meagher, tune into Mad Dog Sports Radio on SiriusXM (channel 82) Sunday-Thursday, 11 p.m. to 2 a.m. ET. To keep up with Stassi and the rest of the VPR crew, tune into new episodes of Vanderpump Rules on Monday nights at 9/8c on Bravo.

Are Vanderpump Rules stars Jax Taylor and Stassi Schroeder back together?