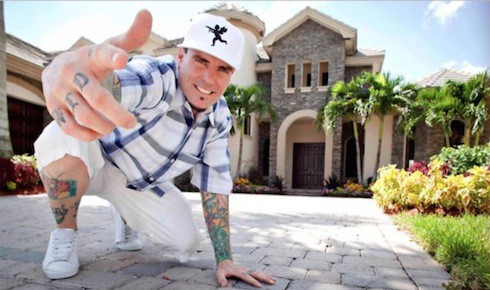 What do Vanilla Ice’s knuckle tattoos say? The ink has become as infamous as the man himself, thanks in large part to the unexpected popularity of his new DIY Network show The Vanilla Ice Project, in which the Iceman flips homes for fun and profit. And, as it turns out, it’s easy enough to tell what the knuckle tats say–but what on earth do they mean?

As you can probably tell from the photo above, Vanilla’s right hand says “WIDE,” though the index finger is mostly out of the shot. Here’s a different photo with the right hand completely visible: 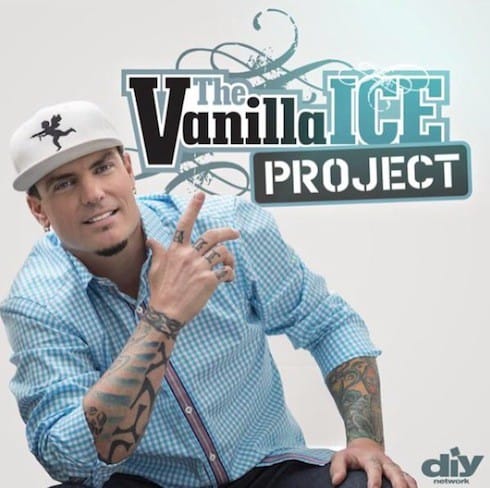 And here’s another photo, this time of Vanilla Ice’s left hand, where the word “OPEN” is (more or less) plain to see–and in which you can also make out the “WIDE” on his right: 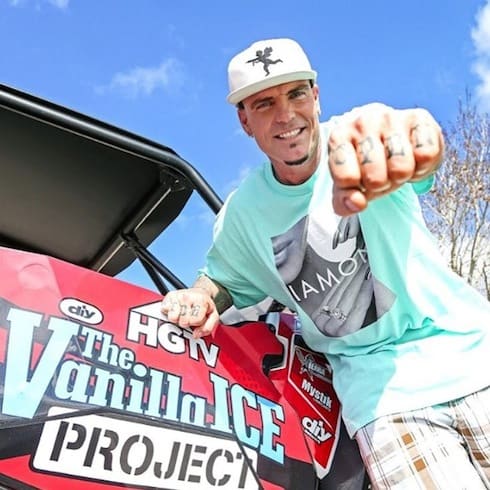 So! What do Vanilla Ice’s knuckle tattoos say? They say “WIDE OPEN!” Mystery solved, right! Well–not exactly. Because, as it turns out, while VI has a boatload of tats, and is perfectly willing to show them off, he doesn’t often talk about what they all mean. Part of that is because he doesn’t always remember: by his own admission, most of Vanilla Ice’s tattoos came during his darkest period, the mid-90s, when success seemed to have passed him by and he was high on illicit drugs most of the time. A 1998 feature story in the Miami New Times got Vanilla to open up about the time, and he was quite frank:

Actually, a good portion of his body is covered with ink he received during his “mind-blowin’ days,” a reference to his heavy drug use during the making of his 1994 rap record Mind Blowin’. “A lot of my friends are tattoo artists,” he explains. “That was in my binge days. I didn’t even realize how many I was getting, then I got out of those days and I was like, ‘Sh!t.'”

Once he sobered up, Ice realized he had room for one more–so he got a tattoo of a leaf, the meaning of which is crystal clear:

Inked into his stomach is a leaf, symbolic of a new beginning after a heroin overdose in the mid-Nineties. “I was puking and shitting on myself, and man it was ugly,” he admits. “People were throwing cold water on me, and when I woke up, I thanked God I was still alive and promised Him I’d turn myself around. Ever since then He’s been blessin’ me.” The near-death experience may have turned Ice on to a higher consciousness, but he’s not completely fanatical, “I don’t believe in religion. I believe in the Lord and Jesus Christ.”

If you poke around for answers to the question “What do Vanilla Ice’s knuckle tattoos say,” you get a lot of references to Tom Petty. Apparently, people seem to think–without much evidence, it’s worth pointing out–that the ink is a nod to Petty’s line “The future is wide open.” Vanilla Ice himself has not mentioned this line in any place we could track down. However, one 2006 interview, in which Ice talks about what fans should expect from him in a live setting, might offer a clue:

Unpredictable! [laughs] Yeah, it is very unpredictable! We get chaotic, man! We enjoy it! That is why I am out here. I mean, financially, I have made great investments. I’ve got a mortgage company, real estate investments, I build homes all over Florida….I have done really well in that aspect and opened up several businesses and just cleaned house in Florida. It’s a goldmine. It’s free money the way that I look at it. So that enables me to do what ever the f*ck I want. So when I come out here and I jam, it’s just wide open. I do whatever the f*ck I feel and if the crowd is into it you will see the energy feed. I feed off them and they feed off me and we just get chaotic.

As you ponder that, remember that The Vanilla Ice Project airs Saturday nights at 10 on DIY.

Woman gets a touching tattoo tribute to her mother

How does the Willis Family make their money?