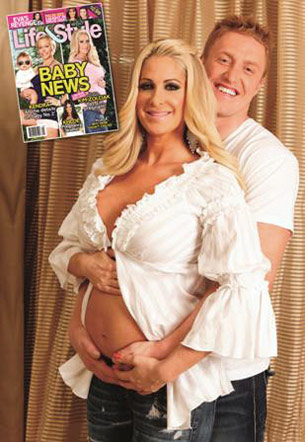 The story first broke in Star magazine in October when Kim’s former girlfriend, DJ Tracy Young, told the tabloid that she witnessed Kim take numerous pregnancy tests, all of which came back positive. Kim adamantly denied the rumors in the media as late as last night during her appearance on Watch What Happens Live when she laughed off the rumors when asked point blank by host Andy Cohen. (Numerous viewers had wanted to know if she actually was pregnant and the fact that she was drinking tea instead of alcohol added fuel to the suspicion fires. She claimed that she was off the hard stuff because she was following the professional advice of fellow cast member and professional musician Kandi Burruss.)

Life & Style can exclusively reveal that Real Housewives of Atlanta star Kim Zolciak and boyfriend Kroy Biermann are expecting their first child together! “I was surprised!” Kim, 32, tells Life & Style about the pregnancy. “While it wasn’t planned, God clearly has a bigger and better plan for us and we’re excited.”

Kim addressed the leak by DJ Tracy Young, stating that she felt betrayed. “I was appalled and disgusted by that,” Kim tells Life & Style. “I wasn’t through my first trimester — you never know what could happen.” 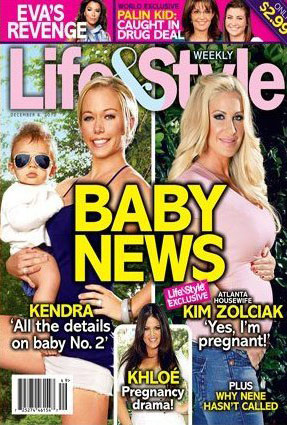 Kim says she is three months along and now feels comfortable sharing the good news, stating “I’m the happiest I’ve ever been.”

So are there wedding bells in the near future? If she had kept her mouth shut she could have “pulled a Phaedra” by getting married a month ago and then telling folks her doctor wanted her to deliver two months earlier down the road. But, Kim don’t play that game!

“I definitely don’t want to get married while I’m pregnant,” she says. “But I can see myself marrying Kroy in the future.”

The newest Zolciak, be it a boy or a girl (Kim doesn’t know yet), will join siblings Brielle, 13, and Ariana, 9, as a cast member on the immensely popular reality series. Heck, he or she might even become best friends with lil Apollo Nida, Jr. – who knows?!? Unless lil’ Kim is “tardy for the party” the stork will fly into the ATL in May of 2011 – just in time for Mother’s Day!

For more from Kim on her pregnancy, pick up this week’s issue of Life & Style, on newsstands now.