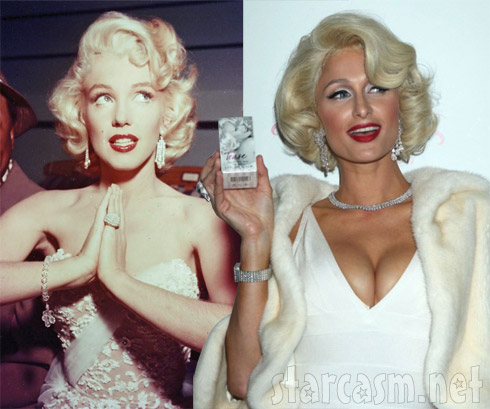 Paris Hilton paid homage to her hero Marilyn Monroe by dressing up like her for the launch of the new Paris Hilton fragrance “Tease.”

The skinny tabloid starlet donned a white dress and fur stole reminiscent of the gown worn by Marilyn in the infamous scene from The Seven Year Itch, which seems appropriate given the fact that Paris has been suffering from (and spreading) numerous seven-year itches.

Here is a side-by-side of Paris and Marilyn in their white dresses for comparison: 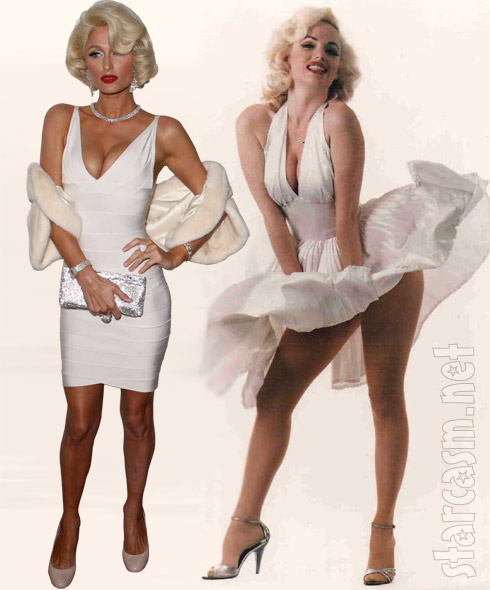 I suppose Paris went with the tight skirt because she’s sort of the inverse of Marilyn in that it is headline news whenever she doesn’t flash her panties. Here she is at her most Marilynesque moment:

All joking aside, Paris Hilton has to deal with a ton of crap from the media (a lot of it deserved) but she always seems to maintain a great attitude and is never one to shy away from having a little (or a lot of) fun. I’m certain this little Marilyn tribute will stir up a bunch of controversy among Marilyn enthusiasts, which will be nothing but great publicity for the Tease fragrance, but I have to confess it put a smile on my face, although my head was shaking at the time. Here are lots more photos of Marilyn Mon-ho from the Tease launch party held at My Studio in Hollywood, California on August 10th, 2010, beginning with a nice, loooong look: