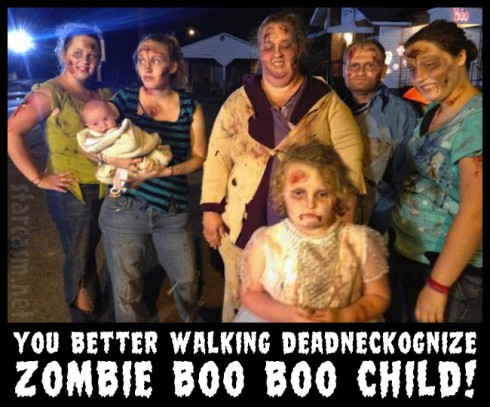 Last night marked the return of everyone’s favorite redneckognizable pint-sized superstar as TLC aired the first of three Here Comes Honey Boo Boo “Holladay Special,” this one featuring the Thompson family as they prepare for (and recover from) Halloween!

The episode featured all sorts of Honey Boo Boo hi-jinx including Halloweenifying the front yard with inflatable decorations, a trip to the pumpkin patch, carving jack-o-lanterns (with a pumpkin innards fight and Uncle Poodle putting his head inside a “50 lbs at least” jack-o-lantern and not being able to get it out), a lengthy discussion about marannaise and Mama June’s mayophobia, a trip through a corn maze that resulted in Mama June having to “pop a squat” after getting lost, trick-or-treating at the Milledgeville Country Club because “Duh, that’s where the rich people live!,” and the sorting of Halloween candy — which was essentially Mama June eating samples and Honey Boo Boo filtering out all the fruits and vegetables and tossing them in the yard for the deer. (Gotta keep those deer healthy y’all!)

Here’s an excerpt clip from the episode:

Ah, but of course the most important part of the episode was… Halloween costumes! The family packed up and headed down to the (used?) costume shop where they tried on numerous hilarious outfits before each made their final, secret selections. Here is what each of the Thompson family members went as for Halloween…

Alana (Honey Boo Boo) went as a goth jester — or something like that.

Baby Kaitlyn was a hot dog

Going along with Kaitlyn’s hotdog costume, Chickadee (Anna) and Chubbs (Jessica) dressed as ketchup and mustard (In deference to Mama June’s phobia, neither went as mayonaise, though baby Kaitlyn was reported generating some of her own throughout the night.)

Sugar Bear went as a bear. Honey Boo Boo thought the costume lacking, so she went tot he kitchen and retrieved a 5-pound bag of sugar (about one pitcher of lemonade’s worth) and handed it to her pop so he could be Sugar Bear.

Poor Pumpkin (Lauryn) mishandled a car keys toss from Sugar Bear, which apparently caused some pretty serious damage to her right eye, causing her to miss out on the trick or treating festivities and costumegery.

That just leaves Mama June! After having her hair dyed blonde earlier in the episode, Sugar Bear got inspired and ordered her a costume of… Marilyn Monroe’s famous white dress from The 7-Year Itch! (You know, the one that gets blown up by a vent on the sidewalk?) 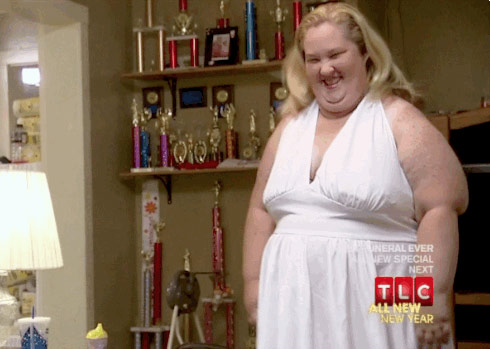 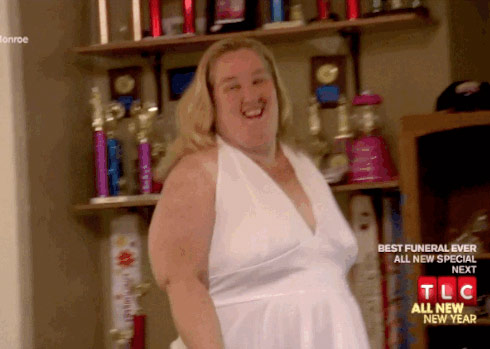 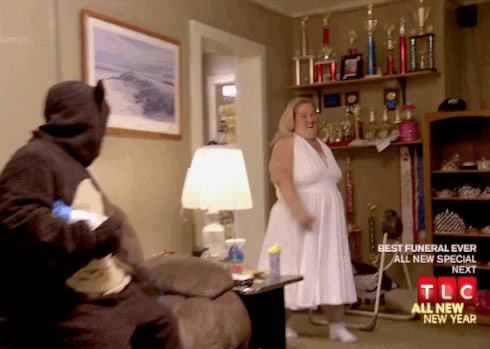 Sugar Bear was clearly moved by the vision of Mama June Monroe, leading to one of the greatest Here Comes Honey Boo Boo animated gifs of all time:

I guess we can add bears to the list (along with gentlemen) of things that prefer blondes!

Sadly, Mama June thought the outfit was too revealing and eventually opted to allow her daughters to do one of their favorite things (wrap stuff in free toilet paper) and go as “Mummy June.”

Be sure to tune in next Sunday night at 9/8c for a brand new Here Comes Honey Boo Boo Holladay Special, this time with a Thanksgiving theme! (Can you say Rednecksgiving?)