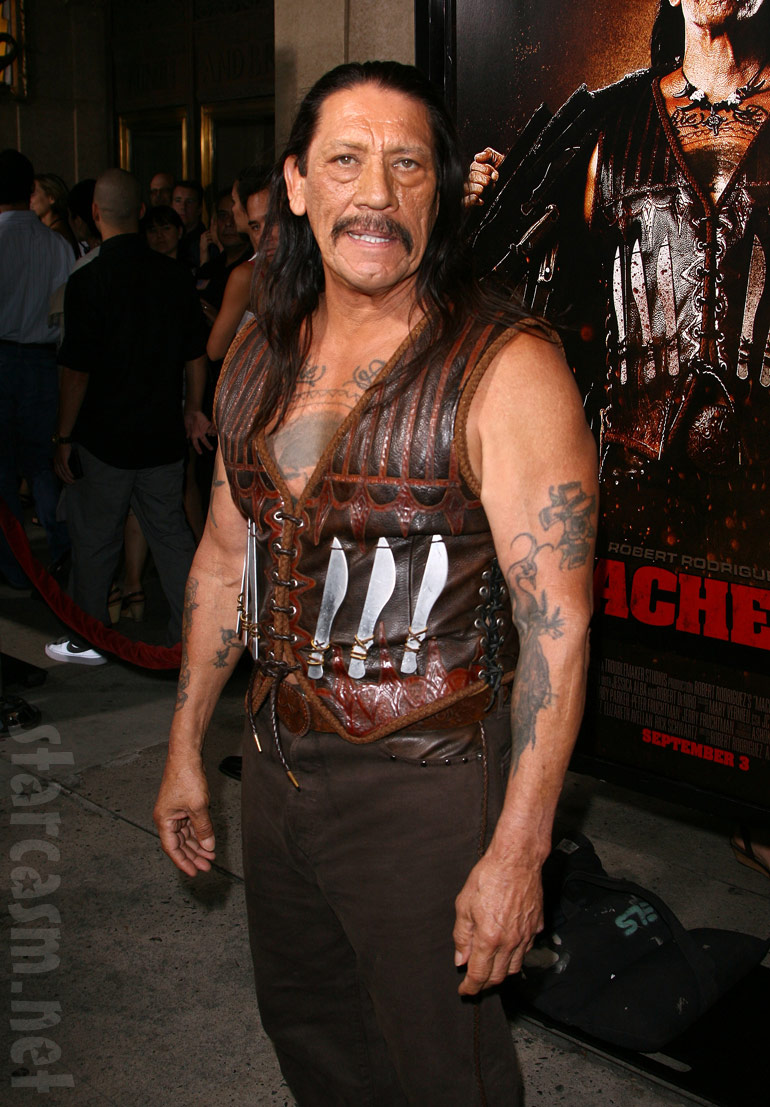 I was just about to call it a night and hit the sack when these photos from the Machete Premiere held at The Orpheum Theater in Los Angeles earlier tonight popped up on my screen! Oh man, there ain’t NOOOO sleep gonna happen until I get these bad rascals posted!

The film is based on a trailer from Robert Rodriguez and Quentin Tarrantino’s Grindhouse and stars Danny Trejo as the title character. The movie is reportedly in the same action/exploitation vein as Grindhouse and also stars such pop culture icons as Steven Seagal, Lindsay Lohan, Cheech Marin and Don Johnson.

Here’s the original trailer from Grindhouse:

So how in the world could a premiere live up to THAT?!? Like THIS!!! 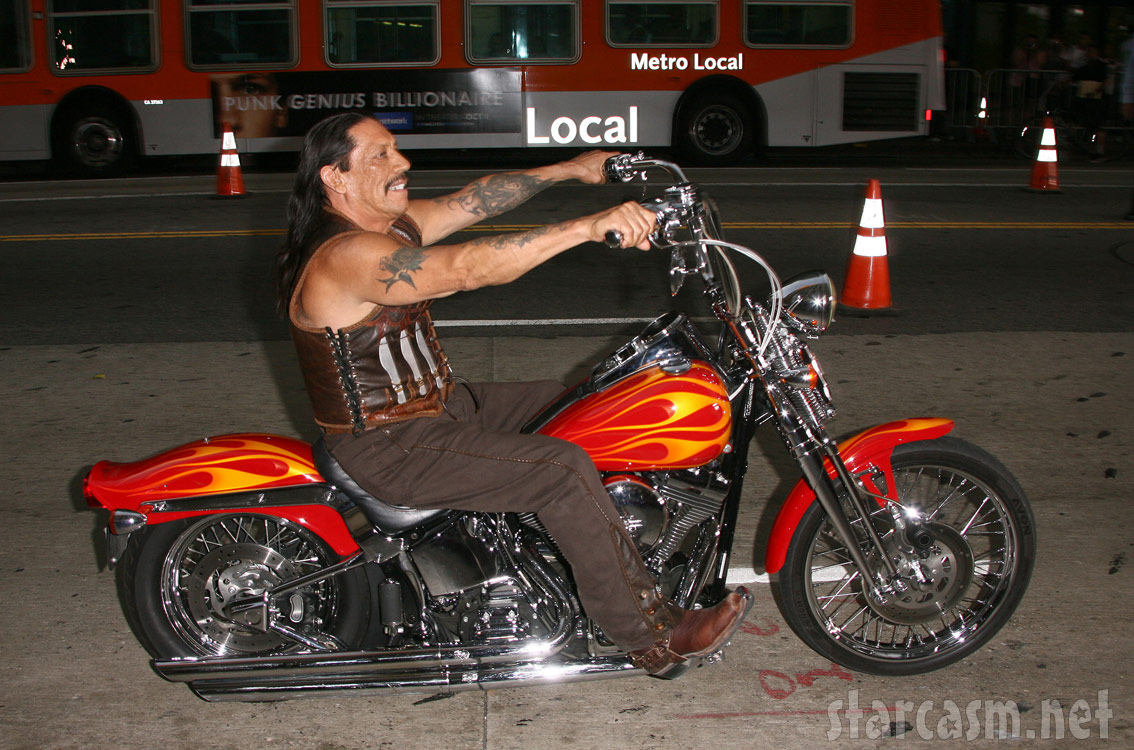 BOO-YEAH! That is awesome! Jessica Alba is also in the film and she arrived wearing a smoking hot skin-tight tire tread dress! Here’s Jessica and then Robert Rodriguez in his pimped-out purple ride followed by a gallery of lots more ultrabadass images from one of the coolest LA soirees ever! 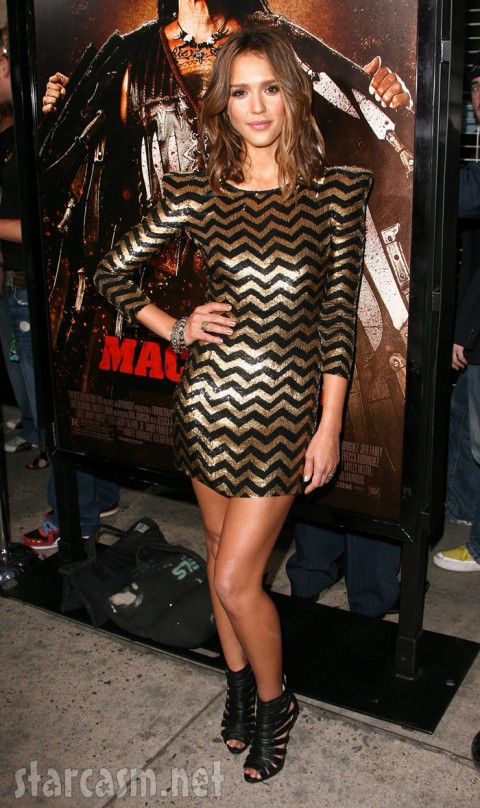 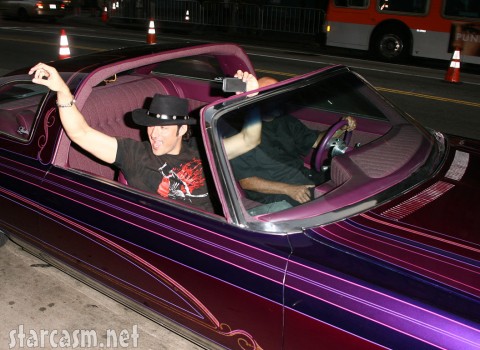 Click thumbnails to see larger images in the gallery. (Does anyone know if that’s Elise Avellan or her twin sister Electra Avellan? Fame Pictures says it’s Electra but Elise is credited with a role in the movie on Wikipedia.) 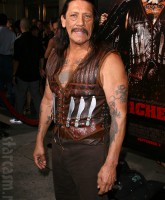 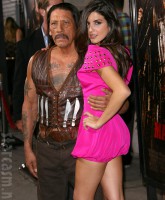 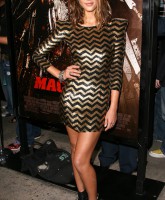 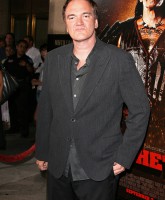 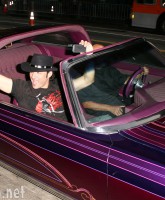 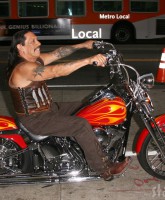 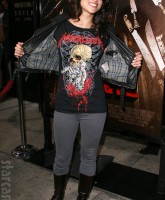 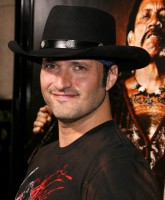 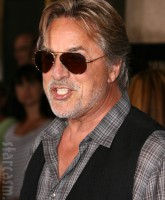 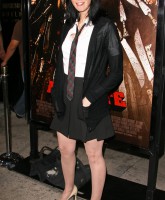 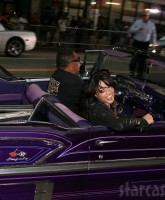 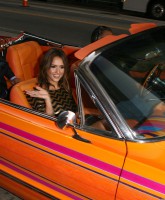 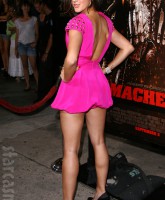 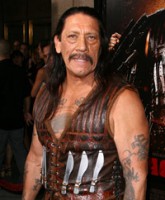 All above photos: Juan Rico/FAME Pictures

The film focuses on Machete (Danny Trejo), a renegade former “Mexican Federale”. After a shakedown with a druglord (Steven Seagal), Machete roams the towns and streets of Texas looking to do yard work in exchange for money. Michael Benz (Jeff Fahey), a local businessman and spin doctor, explains to Machete that the corrupt Senator McLaughlin (Robert De Niro) is sending hundreds of illegal immigrants out of the country. In order to stop this, Benz offers Machete $150,000 to kill McLaughlin. Machete accepts the murder contract. As Machete attempts to assassinate McLaughlin during a rally, he is double-crossed and one of Benz’s henchmen shoots him. It is revealed that Benz orchestrated the entire attempted assassination as part of a false flag operation to gain public support for McLaughlin’s harsh anti-immigration laws. By setting up Machete as the patsy, the conspirators make it appear that an outlaw illegal Mexican immigrant has tried to assassinate the senator.

A wounded Machete is taken to a hospital to be treated for wounds, and escapes from the guards before he can be arrested. Agent Sartana (Jessica Alba), a persistent U.S. Immigration and Customs Enforcement agent, is sent by her superior, Lt. Stillman (Don Johnson), to go find and capture the injured Machete. Machete, with the help of She (Michelle Rodriguez), a saucy taco slinger, recruits Padre Benito del Toro (Cheech Marin), Machete’s “holy” brother. To take revenge on Benz, Machete kidnaps Benz’s wife and his daughter, April (Lindsay Lohan), who has a penchant for guns. After encountering Machete, Sartana begins to have a special interest in the blade slinger. Machete rallies a group of illegal immigrants together, and begins to hunt the people who double crossed him.

* Danny Trejo as Machete, “a legendary ex-Federale with a deadly attitude and the skills to match.”
* Steven Seagal as Torrez, a druglord.
* Michelle Rodriguez as Shé, “a taco-truck lady with a rebellious spirit and revolutionary heart.”
* Jeff Fahey as Michael Benz, “a ruthless businessman with an endless payroll of killers.”
* Cheech Marin as Padre, “a priest who’s good with blessings, but better with guns.”
* Lindsay Lohan as April Benz aka The Sister, “a socialite with a penchant for guns” and “a nun with a gun.”
* Don Johnson as Von, “a twisted border vigilante leading a small army.”
* Jessica Alba as Sartana, “a beautiful Immigrations Officer torn between enforcing the law and doing what is right.”
* Robert De Niro as Senator McLaughlin
* Rose McGowan as Ginger, hired by Benz
* Electra and Elise Avellan as The Nurses at the hospital where Machete is treated.
* Cheryl Chin as Torrez’s Henchwoman
* Tom Savini as Unknown character. He was seen in the first official trailer as a man with a machine gun who Machete stalked.
* Daryl Sabara as Julio
* Carlos Gallardo as Deputy Carlos
* Alicia Rachel Marek as June Benz, socialite wife of Benz and April’s mother.
* Tim Roth as Agent Orange, the title character of Quentin Tarantino’s rumored fake trailer.
* Rick Yune as Li Chan, Agent Orange’s South Vietnamese Sidekick.
* Sacha Baron Cohen as Colonel Weathers, in the Agent Orange trailer.
* Stacy Keach as Doc Franklin, the rumored antagonist of the fake trailer.

Cheech Marin married pianist Natasha Rubin this weekend: walked down the aisle to “Earache my Eye” [with pictures and lyrics]