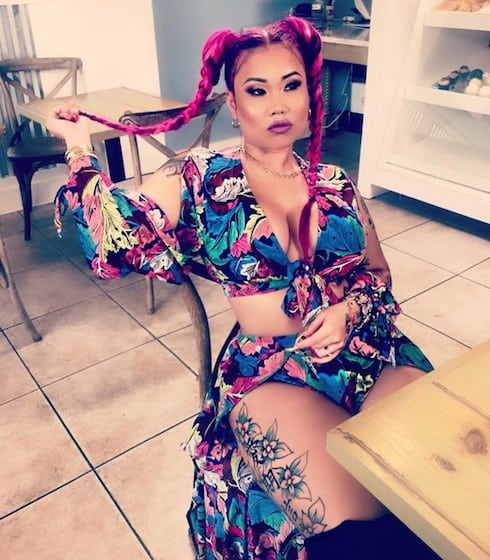 Love & Hip Hop Atlanta Season 6 is just a few weeks away, and the show has unofficially announced the first of its new cast members. Myha Luong–affectionately (and popularly) known as “Lovely Mimi”–is the first Vietnamese-American woman to feature in Love & Hip Hop, and is a new citizen of Atlanta as well. Our rundown of the Lovely Mimi bio indicates that while she and her family are actually from Maryland, and still have business ties in that state, she’s transplanted to the south partly to join the LHHATL Season 6 cast and partly to expand her burgeoning nail empire:

Indeed, the UltraViolet Nail Lounge Instagram page indicates that the establishment is under new management, while her old shop in Capital Heights MD remains open as well. (Although a quick glance at Mimi’s official page reveals a different address for her salon in the ATL, indicating that her business might be growing faster than first thought.)

Mimi’s presence on LHHATL is due largely to her huge online fan base–she has over one million Instagram followers based on her nail work and outspoken personality. How did she get into the nail business in the first place? “When you are Vietnamese, and you don’t go to school, your family tells you to” work in a nail salon, Mimi recently told DJ Smallz Eyes. In the same interview, Mimi revealed that she set herself a goal: within ten years of entering the business, she would own her own shop. Mimi started at 16, but had her own shop by age 24. (Mimi told Smallz that that was a year and a half ago, which means she’s appearing on LHHATL at the young age of ether 25 or 26.)

Of course, Mimi doesn’t neglect the “hip hop” part of her latest endeavor. Here’s “We Don’t Care,” her most recent single:

LHHATL fans might also remember that Mimi was involved in a controversial scuffle a few months back. Allegedly, she got into a huge fight with her best friend from Maryland after convincing the friend, the woman’s husband, and their three kids to relocate to Atlanta with Mimi and her family. Because of the fight, Mimi kicked her friend’s family out of the house they were all sharing; after that, the friend retaliated with something of a beat-down. Mimi shared her side of the story in a since-deleted Instagram post:

Meet the newest member of Love And Hip Hop Atlanta @itslovelymimi . She just got jumped! Pics of her and Joselise on @thefameolousroom

The controversy came from Mimi’s use of an N-bomb, which she then took to Instagram to try and explain. But that video was also deleted when her explanation was deemed unsatisfying. See what you think of it:

As for her role in the LHHATL Season 6 cast, fan site Love & Hip Hop Tea caught the first pics of Mimi out and about with the rest of her crew during initial filming:

You can follow Mimi on Twitter here, and on Instagram–where she’s far more visible–here. And make sure you check her out when the Love & Hip Hop Atlanta Season 6 cast debuts this March on VH1.

PHOTOS Who is Ty Young, Mimi Faust’s girlfriend on LHHATL?