Kelly Osbourne is the latest poster child for successful weight loss and she proudly showed off her accomplishments on the red carpet at the 2010 American Music Awards in a tight ‘n’ sexy black lace dress and a huge, poofy-retro blond hairdo!

If you want to see even more of the lesser Kelly, be sure to check out the new issue of Shape magazine which features Kelly Osbourne on the cover in a small red bikini! Inside Kelly talks about the weight loss process and her unhealthy relationship with food:

“I was called fat and ugly in the press almost my entire life,” says the 26-year-old. “I understand that being judged by others comes with the territory, but it broke my heart and ruined my self-esteem. It sets you up to hate yourself in a huge way. I was so angry about the things people said about me. I truly believe it’s the main reason I turned to Vicodin and ended up in rehab three times. I just hated myself.”

She reveals in the magazine that she is an emotional eater and that “When I get upset, my diet goes out the window.” And not only did she eat more, but her diet was comprised of “terrible, fatty food” like pizza and french fries. 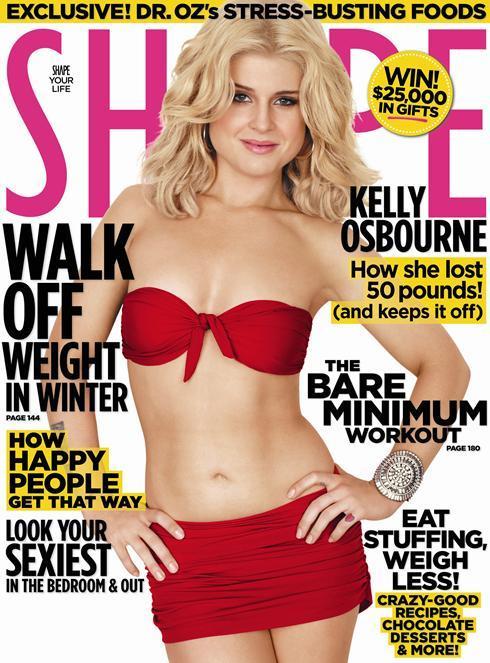 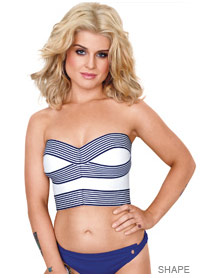 The first time she became fully aware of just how unhealthy her diet was occurred while a contestant on Dancing With The Stars. Kelly’s dance partner Louis van Amstel suggested that a high-protein, low-carb diet would give her more energy and help her lose weight so she tried it out. During the course of the competition Kelly lost 20 pounds!

Immediately afterward she began to slowly put the pounds back on before she decided to draw a line in the sand. She began working with personal trainer Sarah Hagaman, who recommended by her mother Sharon, and as a result has lost a total of 50 pounds to date!

And all that crazy hard work has paid off—big time. “Ultimately, I’m really glad I lost the weight the way I did,” says Kelly. “I never thought in a million years I’d be that healthy girl who wakes up every morning to exercise. After being called ‘cherubic and chubby,’ I’m rocking a bikini! I feel silly, but I think I’m going to cry. Being on the cover of SHAPE is the biggest victory I could ever hope for.”

Congrats to Kelly, who looks absolutely fantastic! Heck, she might even be too thin! (That was for you Kelly) 🙂

And for the heterosexual dudes all over the planet, more Kelly Osbourne on the red carpet followed by a behind-the-scenes video from the Sahpe bikini photo shoot!!