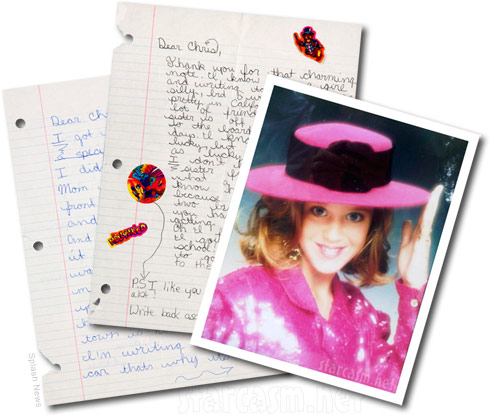 Do you have a Katy Perry fan on your Christmas list and want to get him or her something really special and unique? How about a couple of love letters written by Katy when she was 11 years old to a boy named Christopher Villar, whom she met at summer camp and liked “alot?” That’s an option thanks to a new Julien’s Live auction titled “Icons and Idols 2014: Rock n’ Roll!” (Sorry, the Roartrulescent Katy Perry throwback glam shot above is not included.)

The two letters up for auction were written in 1995 after Katy Perry met Christopher Villar at the Dry Gulch Christian summer camp. In the first letter (written in blue ink on blue-lined notebook paper – double spaced) Katy explains that she got Chris’s address after his mother overheard her saying she liked him and she suggested Katy send her son a letter. (Perfect, right?) Here’s the front of the letter followed by a transcript of the front and back. 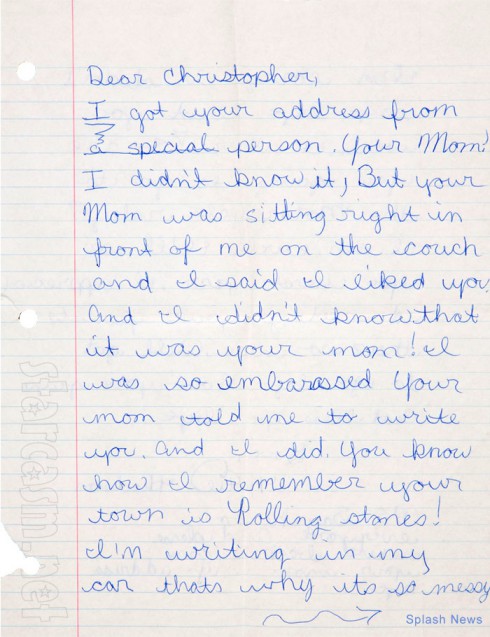 I got your address from a special person. Your Mom! I didn’t know it, But your Mom was sitting right in front of me on the couch and I said I liked you and I didn’t know that it was your mom! I was so embarassed. Your mom told me to write you. And I did. You know how I remember your town is Rolling stones! I’m writing in my car thats why its so messy.

I’m sorry I didn’t say bye, but you weren’t there! So are you going to go to the Motorcycle raley? I am. Well I’ll see you next year. I appreceated meeting your parents their so nice. Well got to go bye! Love you guys. God bless you! bye!

P.S. Say hi to everyone. And please write back, I gave your mom my address. bye! 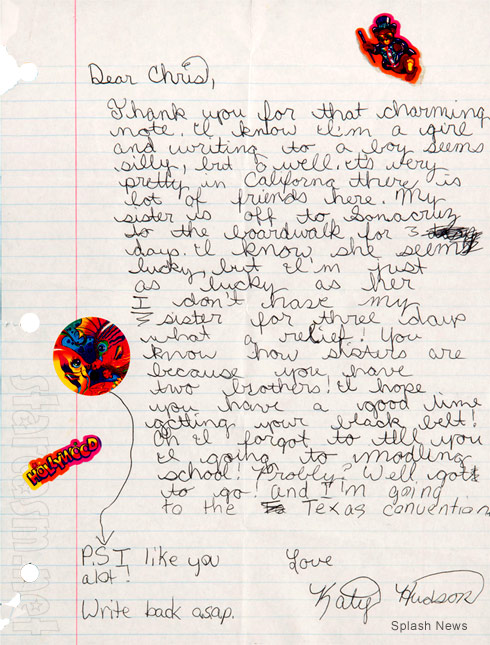 The letter apparently went over well and Chris responded. It’s unclear what Chris’s letter said, but we do have Katy’s next letter in response in which she ramps up her Katy Perry game by foregoing the double spacing and adding some colorful and fun Lisa Franktastic stickerage! Also, she mentions that she might be going to “modling” school and shows she’s in the early stages of becoming a “California Girl!”

Thank you for that charming note. I know I’m a girl and writing to a boy seems silly, but o well. It’s very pretty in Coliforna there is lot of friends here. My sister is off to Sanacruz to the boardwalk for 3 days. I know, she seems lucky, but I’m just as lucky as her. I don’t have my sister for three days what a relief! You know how sisters are because you have two brothers! I hope you have a good time getting your black belt! Oh I forgot to tell you I going to modling school! Probly? Well got to go! And I’m going to the Texas convention.

The auction for Katy Perry’s childhood love letters has already started, with both letters estimated to bring in between $600-$800 each. The starting bids or $300 for each, but the reply letter (with the stickers) is already up to $350.

The auction runs through November 7 at 10AM PST. I’m already petitioning the Starcasm honchos to buy these to kick off our pop culture memorabilia collection and future museum. 🙂