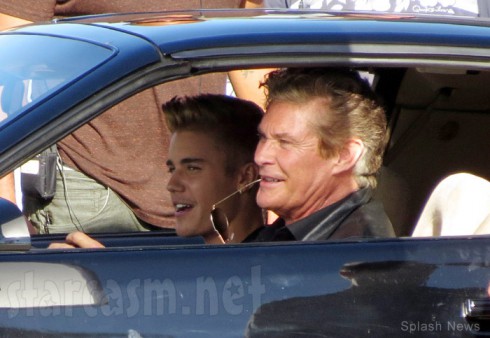 It appears that Justin Bieber has finally figured out how to not only avoid getting into any more legal trouble, but also how to avoid pretty much any and all criticisms: just buddy up with The Hoff! And just in case that wasn’t enough, he buddied up with The Hoff in K.I.T.T. from Knight Rider!!!

So what could possibly have brought together Siri’s four-wheeled granddad and two fellas that have the combined ability to make pretty much every woman from the ages of 0-125 scream and toss their unmentionables? Hollywood of course! The Biebselhoff were together filming the comedy Killing Hasselhoff (alternate title: Celebrity Death Pool) which stars The Hangover‘s Ken Jeong as a nightclub owner who decides the best plan for paying off his loan shark would be to win his club’s celebrity death pool by, you guessed it, killing David Hasselhoff! 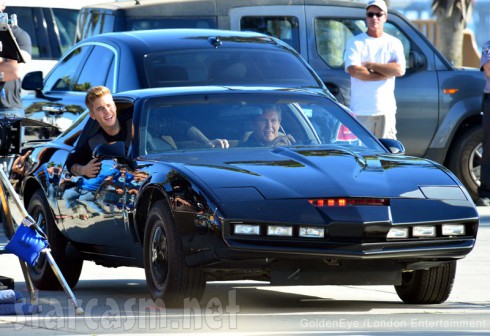 In the scene with Justin Bieber it looks as though The Hoff is making an appearance at an event called “David Hasselhoff’s Celebrity Autograph Extravaganza,” which I’m guessing merited a guest appearance by Justin Bieber. Also signed on for the film (according to IMDB) is SNL alum Jon Lovitz with a guest appearance from Hulk Hogan, among many others I’m sure. The film is directed by Darren Grant (Diary of a Mad Black Woman) based on a script written by Peter Hoare.

I dunno – judging from all the behind-the-scenes photos combined with the fact that it will star Ken Jeong alongside David Hasselhoff, I’m thinking this film could be pretty damned hilarious! Here are some more photos from the set courtesy of The Hoff’s Twitter feed:

Ken Jeong, The Hoff and friends having fun on the set of our new movie. pic.twitter.com/k0owywL7ps

Me and my bud pic.twitter.com/1K5nppLA6n