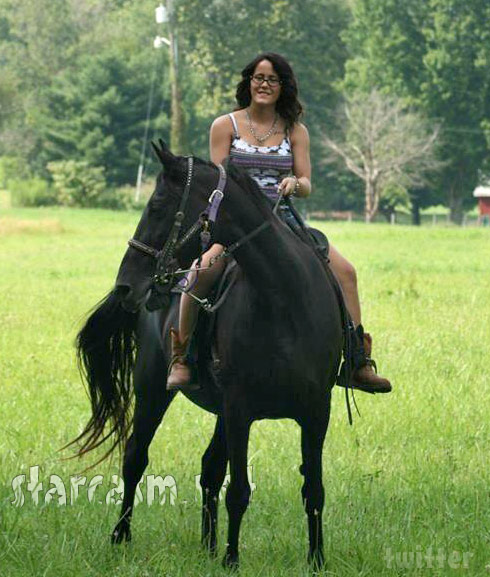 Usually when I am completely surprised by something Jenelle Evans is doing it involves screen-capped text messages, a cell phone video, and/or a new mug shot photo, but the Teen Mom 2 star’s latest out-of-the-blue escapade is jaw-droppingly… romantic and picturesque?!? 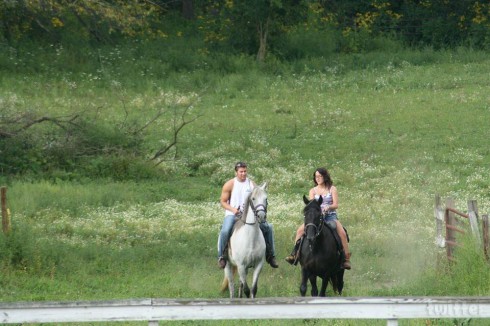 Jenelle, her new son Kaiser, sure-to-soon-be-hubby Nathan, their two dogs, and Nathan’s brother’s dog all piled into their Hummer (or as Jace calls it, “the dog mobile”) and took a road trip up to where it’s round on both sides and “hi” in the middle to visit Nathan’s aunt on a farm/ranch in Ohio!

So why were Jenelle and Nathan in Ohio? According to Teen Mom Truth they made the trip to provide a better home for Nathan’s dog Mugen, the Husky that made headlines a couple of weeks ago after an episode of Teen Mom 2 featured Jenelle getting upset at him, as well as Nathan’s brother’s dog. “Mugen, and Nathan’s brothers dog are going to be staying in Ohio until Jenelle and Nathan move into their new home,” reports the site, “which will have a yard with a fence.” I’m sure Peta will be pleased. 🙂

While at the ranch, Jenelle and Nathan took the opportunity to saddle up and ride some horses amidst a breath-taking buckeye landscape. The result, thanks to the talented Teen Momarazzi skills of Nathan’s Aunt, is a series of AMAZING photos:

Her name is Dolly. She was a very easy and cooperative horse to ride. ☺️ pic.twitter.com/JrFG3qL59q 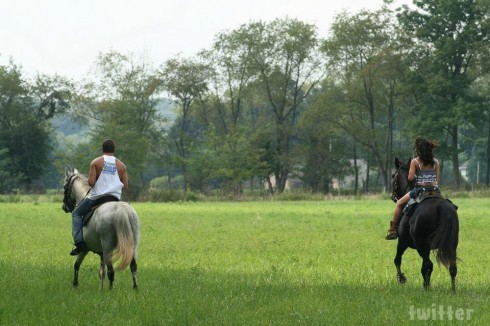 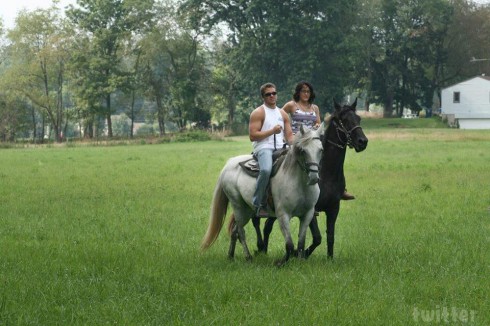 A Jenelle Twitter followers accurately responded to one of the pictures by tweeting, “this could be a book cover.” We took that comment as a challenge, and here’s the result: 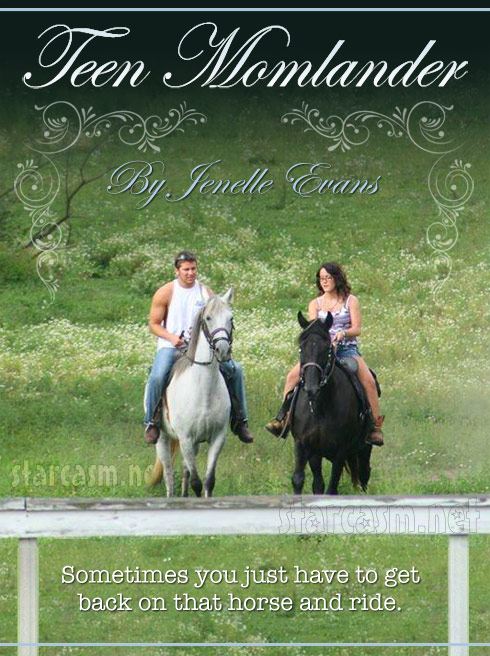 Ah, but horses weren’t the only thing Jenelle and Nathan were straddling and riding on their trip! (I’ll pause a minute to let your imagination run with that intro.) They also hopped on a motorcycle for a scenic drive! Here’s a picture from Jenelle in which you can just barely make her out in the rear view mirror taking the photo:

There has been a bit of confusion on Twitter as far as who all went along for the retreat, but it’s pretty easy to ascertain given Jenelle’s tweets. This photo shows that Kaiser and Jenelle’s boob were definitely there:

Baby Kai falls asleep on the boob even when he isn't eating. Lol too precious. @GroundLevelUp 's child. pic.twitter.com/RUT8jTxWcL

And here’s a picture from early in the trip showing the interior of the Pooch Wagon:

Jax later met a member of the taxonomic family Equidae for the first time:

Alas, Jace apparently did not get to go on the trip, but it appears as though Jenelle plans to bring him along next time for an Ohio adventure winter style! “It was a fun trip!” Jenelle tweeted of her time in Ohio. “Can’t wait to come up this winter with Jace !! Take him sledding and tubing !!!”

And speaking of Jace, Jenelle seemed to drop some hints about what we can expect as far as her getting custody of him again in the future:

U guys always ask me about getting custody back of Jace. Well just tune into the entire season of #TeenMom2 and u will find out. #Promise

Perhaps Jace will soon be enjoying that big backyard full-time too!

PHOTOS Jenelle Evans and Nathan Griffith pictured together in underwear — are they back on?