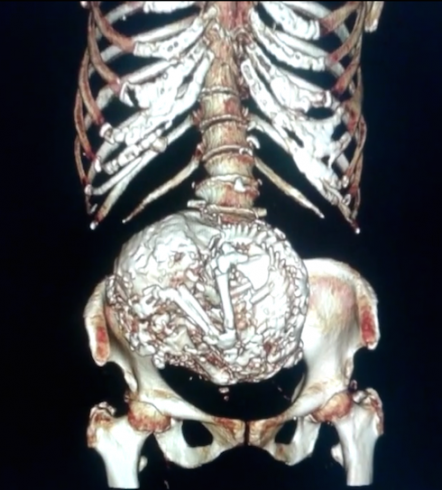 Doctors in Chile were stunned to discover a calcified fetus inside of a 92-year-old woman. Depending on several factors, the object could be a 75-year-old fetus.

What happened was this. 92-year-old Estela Melendez fell down at her home in San Antonio, Chile. She went to the hospital, where doctors performed an X-ray to determine the extent of her injuries. She suffered a minor injury to her right arm–but doctors were more interested in what appeared to be a fetus outside of her uterus.

(This phenomenon is called lithopedion, and sometimes occurs when a fetus dies during an abdominal pregnancy, but is too large to be reabsorbed by the body. The calcification protects the mother from dead tissue.)

According to Hospital Director Mario Vargas Lazo, the object weighs 4.4 pounds, and occupies a large portion of Melendez’s abdominal cavity. He said that the hospital will not perform surgery to remove the fetus, because of the Melendez’s advanced.

The exact age of the fetus is more difficult to determine. The original UPI headline called it a “50-year-old fetus,” and the title of the Chilean news broadcast that originally carried the story said the fetus had been in Melendez’s body for sixty years. However, Melendez herself noted that she was pregnant at 17 but lost the baby, meaning that the object could, in fact, be a 75-year-old fetus.

Woman who faked disability charged with murdering her mother