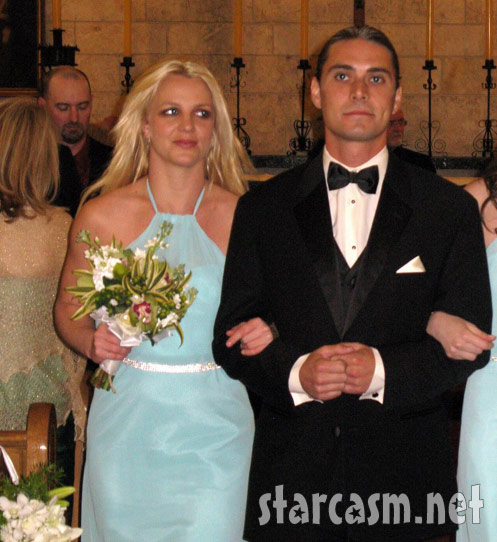 Britney Spears joined a club so many women across the globe are regretful members of.  Life requires taking one for the team sometimes, and wearing an unflattering bridesmaid dress would be one of those occasions. This was the case for Britney as she was a bridesmaid for her assistant Brett Miller’s wedding held at North Miami’s Spanish Monestary.

The photo above was taken of Britney as she walked down the aisle  in a powder blue satin number with a glittering waist belt.  According to sources Britney took it all in good stride and was all about helping and celebrating her assistant’s big day.

According to The Hollywood Gossip, following the festivities Spears and Trawick pulled up stakes from their place at the Newport Beachside Hotel and holed up at the Frank Sinatra Suite at the Fontainebleau in Miami because the Newport’s “pool wasn’t private” enough.

“At one point in the evening Jason took Britney’s hand and twirled her to Frank Sinatra,” a source said.

Congrads to Brett and to Britney for being there for her friend while honoring the time-tested tradition of wearing the ol’ unfortunate bridesmaid dress.

#HATERS It’s time for another round of “Celebrities Read Mean Tweets!”

Have a Coke and a smile