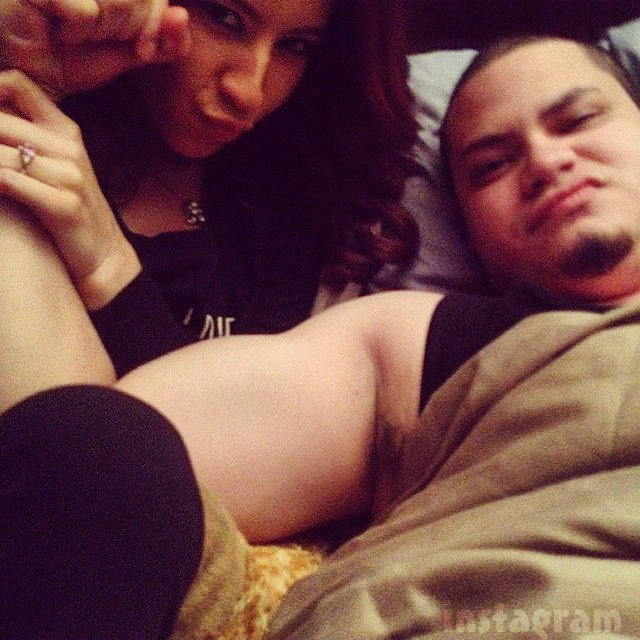 Nobody pays more attention to a woman’s ring finger than Teen Mom fans, and the latest franchise star to spark engagement rumors is Jo Rivera’s girlfriend (fiancee?) Vetzabe “Vee” Torres after she posted a photo on instagram over the weekend in which she is canoodling with Jo in bed and clearly sporting some impressive bling on her ring finger!

Vee posted the photo above and wrote, “Give ya the #IDFWU face & we outttttttt” along with a strong arm emoji. The photo stirred up a lot of engagement buzz among fans, but this is not the first time the ring, which appears to feature a rather sizeable pink stone, has been seen on Vee’s finger. I did a good deal of Veesearch and I found photos of her wearing the ring (or one very similar) on her left ring finger dating back to at least early September:

Here’s a much clearer photo of Vee wearing the ring from October 1:

And another, even better selfie of Vee (DAMN that gal is, um, conventionally gorgeous!) and the mystery ring from October 10:

Although there’s no way I could know for sure one way or the other, I’m going to go out on a limb and say I think this is a promise ring. I just can’t imagine Jo and Vee would be able to keep a proposal and engagement quiet for more than two months! 😉

UPDATE – Vee has responded to this story and cleared up the engagement rumors once and for all! (Click the link to find out what the real deal is!)

Either way, it’s great to see the couple still together after it was revealed on the Teen Mom 2 Season 5 Reunion Special that they were having difficulties. Now they can get back to being a supercouple:

"Behind every great man is not a woman. She is beside him. She is with him not behind him" #wonderwoman #superman #slayed #halloweekend