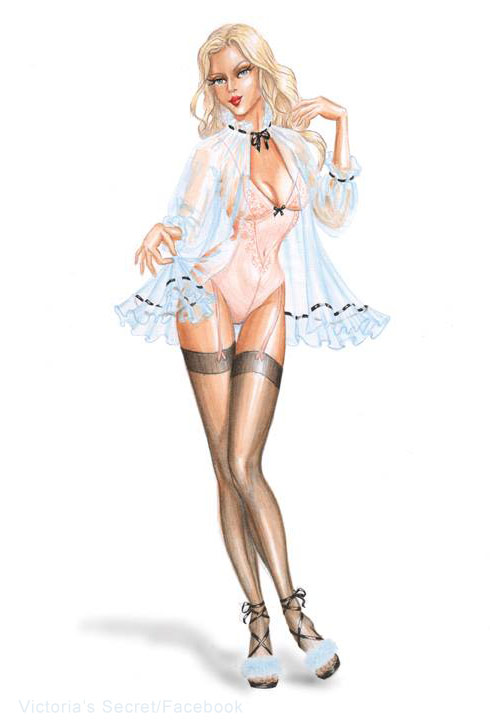 Tuesday night at 10/9c CBS will air the 2014 Victoria’s Secret Fashion Show featuring today’s top models rocking the runway in the lingerie company’s latest over-the-top under-the-clothes unmentionables alongside such A-list performers as Taylor Swift, Ed Sheeran and Ariana Grande. Further demonstrating they are the planet’s unquestionable masters of tease, VS took to Facebook earlier today and posted some of the original fashion illustrations that served as the inspiration for a number of looks fans will be seeing tomorrow night.

Here are a few side-by-side photos of the illustrations and finished product from the show – click to enlarge: 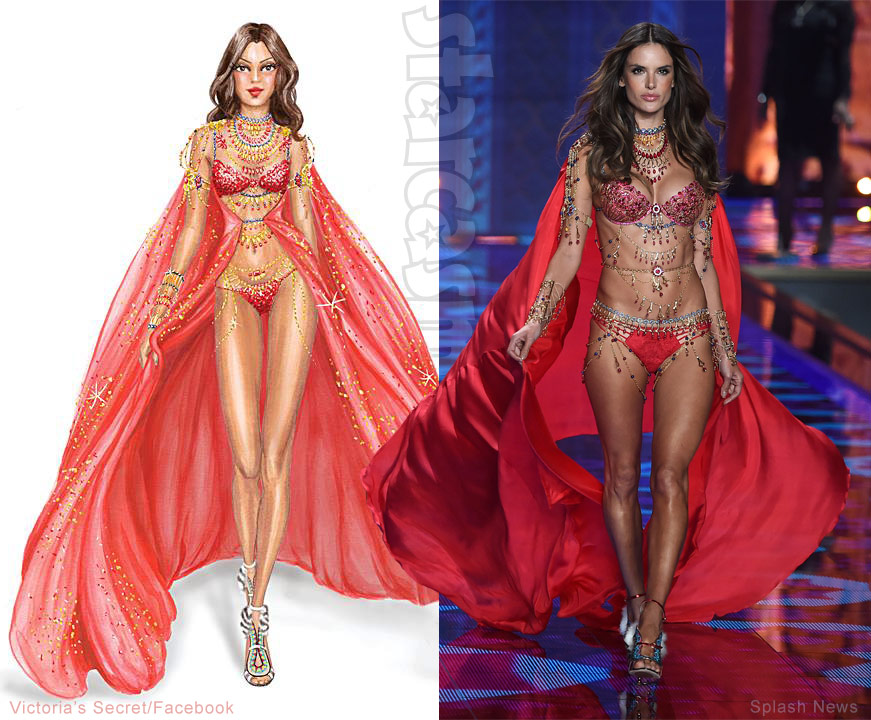 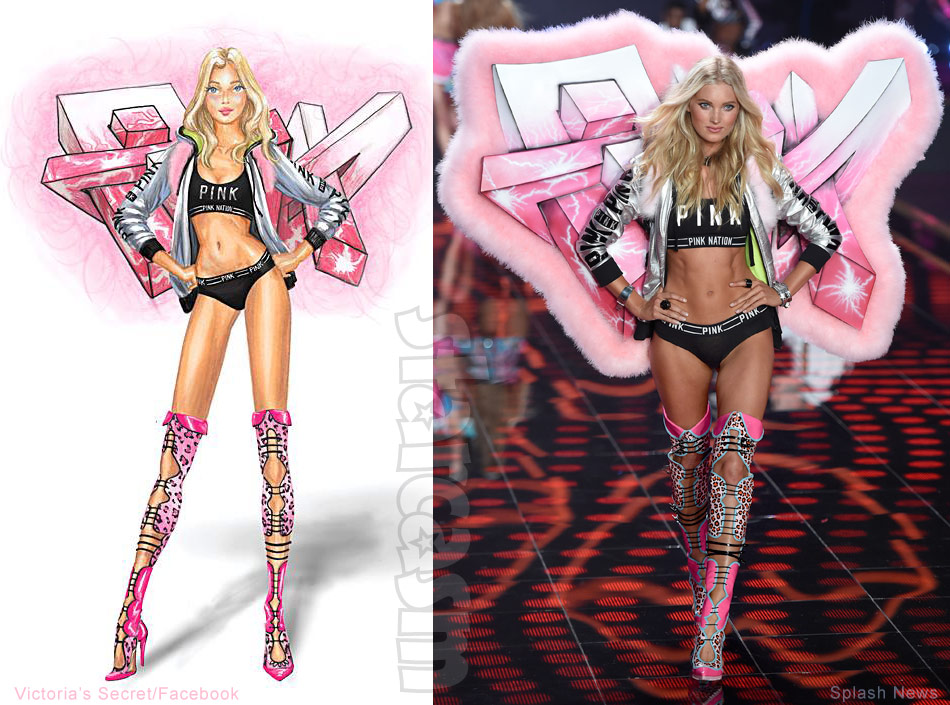 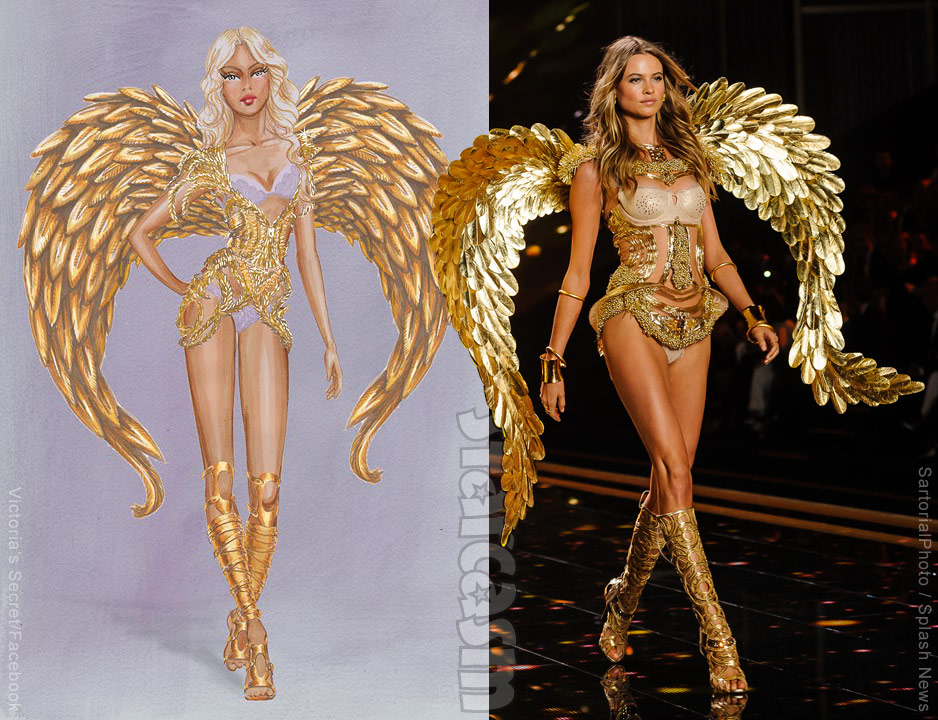 If you’re like me, you probably noticed that the illustrations stretch the female human figure to proportions that somehow make the actual Victoria’s Secret models (who are infamously lithe) look a bit on the stout side. And it’s not as though these illustrations are unique, from what I’ve seen it is pretty much the industry standard to sketch new designs on human forms that are exaggeratedly thin and disproportionate. 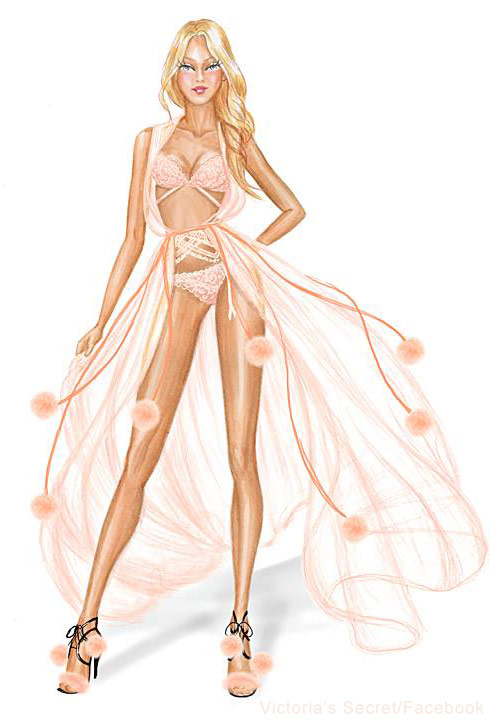 I have a fine art degree with an emphasis in drawing and it is quite shocking to me how differently the fashion industry seems to treat the female form as opposed to how we dealt with it in figure drawing class. After doing a little Googling I ran across someone not only with experience in traditionally figure drawing, but also fashion illustration — and her concerns line up with mine.

Lingerie Blogger Caro, who goes by The Lingerie Lesbian, wrote a very insightful article about the conflicting approaches as she took a fashion illustration class while a student at The Fashion Institute of Technology.

“I can’t help but feel disconcerted when [my teacher] described my drawing as ‘chunky,'” Caro writes. “I looked at her quizzically. ‘It’s fashion!’ was her succinct explanation.”

She later says that there is a consistency to how fashion illustrators and designers tend to treat the female form. “Their legs are always disproportionately long; they are always skinny, with certain bust/hip/waist proportions and waist height.” She points out that anyone creating designs with “a long-haired goddess who would be 8-feet tall and a size 0 if she actually existed” would obviously feel like their vision was “compromised” if the garment was to then be made “for a 5″4′ size 18” woman.

Caro then compares the different approaches to the human form in her life drawing class and her fashion illustration class:

The rules about size and shape of body parts in my life drawing parts are guidelines, drawn from life– the rules in my fashion drawing class are strict, divorced from the variation of actual bodies. What I am supposed to do is look at my life drawing and think, “normal,” while in my fashion drawing class I should think, “Too fat and too short.” Maybe it’s just me, but I’m starting to find these two standards confusing.

That’s why it concerns me that fashion only imagines one body. There is room for visions that don’t fit into the traditional ‘model’ mode– but how can that vision come to pass if we aren’t even being taught to sketch it. Honestly, it’s no wonder that designers want a particular body type on the runway if that is the body type they imagine their designs on!

The discrepancy between the illustrations and reality are at the core of a larger problem, Caro surmises. She wraps up her entry with this powerful paragraph:

Doesn’t it seem odd that the fashion illustrations that line the walls of one of the top design schools in the country are ALL the same shape? If I (and the wannabe fashion designers like me) are being taught to see and produce to one specific ideal and one physical shape, it doesn’t surprise me that this is the first year there has been a plus size line at NYFW. Although there are plenty of physical challenges that stand in the way of designing for any body shape, I don’t think failure of the imagination should be one of them.

I completely agree with Caro, and if you do too, then I suggest you check out her blog and follow her on Twitter and/or instagram because she’s got lot’s of interesting things to say, share and even make when it comes to lingerie!