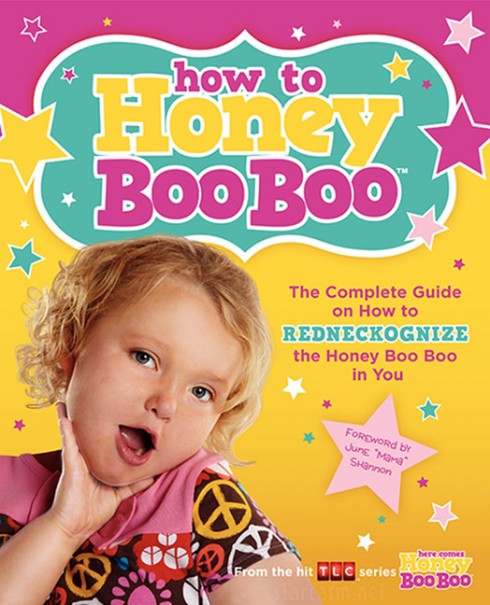 Here Comes Honey Boo Boo matriarch “Mama” June Shannon revealed in March that she was working on a book “bout our lives” due out this July. Although we were able to figure out the title of the book, How to Honey Boo Boo: The Complete Guide on How to Redneckognize the Honey Boo Boo in You, at the time there was no book cover image for it yet. (Of course we created a makeshift one for the announcement post.) Publisher HarperCollins has finally released the book cover (above) and it features Alana “Honey Boo Boo” Thompson sporting a multi-colored shirt covered in peace symbols with a number of colorful stars.

According to amazon.com the book will be released on July 2 in paperback and digitally, but the HarperCollins site lists a July 9 on sale date. Hmmmm… I suppose we will know more the closer we get to July.

Though Honey Boo Boo’s fellow Americans will have to wait until this summer for new Boo, potential fans in the UK will get their first dose this week as the show has its series premiere there on Tuesday! “We r very excited to announce that tlc and our show launches in the UK on tuesday the 30th,” Mama June wrote in the Facebook announcement. “I so wish we could b in the UK when its launches but alana and the girls have school,” she lamented.