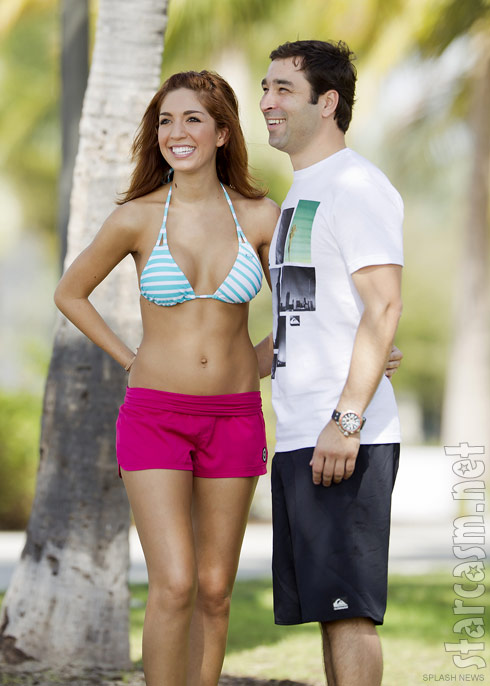 Teen Mom star Farrah Abraham sure is taking to The Sunshine State! The former Council Bluffs, Iowa reality star enjoyed the beautiful weather in Miami earlier today by wearing yet another revealing bikini top with a pair of hot fuchsia short shorts while going for a stroll with her new boyfriend, Marcel Kaminstein.

Does anyone else think Farrah looks completely different? Perhaps it’s the mixture of smiling big, a lighter hair color, and the absence of her patented dark eyeliner. Here’s a closer look:

In addition to holding hands and enjoying another sidewalk meal together, the couple also posed for photos getting all smoochy on some rocks along the beach. (Sorry, all we have is the one above.)

That’s right, I said “posed.” We’ve done a number of these “Farrah out and about in Miami” photo posts and we constantly get comments wondering if the photos were truly casual “paparazzi” shots or staged pictures with a professional photographer. Though I don’t really have proof per se, let me just come out and say, yes these are staged professional shots.

In almost all of the pictures, whether it is Farrah strolling the beach in a lingerie bikini, playing in the park with her former new man and daughter Sophia, or even hanging out on the sidelines of a Miami Dolphins game, it seems obvious that everyone in the pictures knew they were going to be photographed. In some of the other photos in this latest set Farrah and Marcel strike staged poses (like hugging and smooching on the rocks) that were clearly intended for a camera lens and simply couldn’t have been the lucky product of a paparazzo hiding in the bushes!

That being said, Farrah deserves nothing but praise for setting these up! As a matter of fact, out of all her entrepreneurial enterprises to date, this one may be the best. She gets to control where and when these photos are taken and my guess is that she not only gets a say in which ones get released, but also a cut of the money. Why in the world would any one be angry at her for that?!?

(And speaking of these being professional shots and Farrah getting a cut, a word of caution to blogs and other fan sites grabbing these particular images – they are the property of Splash News and they don’t play around with taking legal action. We learned very early on that anything with Splash News, Getty Images, WENN, INF Daily, or other professional photo agency copyrights are better left alone unless legally licensed through them.)

Plus, especially in situations like having a new boyfriend, it allows Farrah to control how the news is revealed and what it looks like. We didn’t find out about about Farrah and Marcel thanks to a crappy photo of the two of them sneaking out of the back of a TGI Fridays – it was a series of nice photos of the two of them strolling along holding hands and having brunch at a sidewalk cafe. It’s a really smart move.

(Sorry for all the words – I was actually trying to win a bet with my editor on how long an article I could write about Farrah Abraham in a bikini without once mentioning her breasts.) (Just kidding.) (B00bies!)