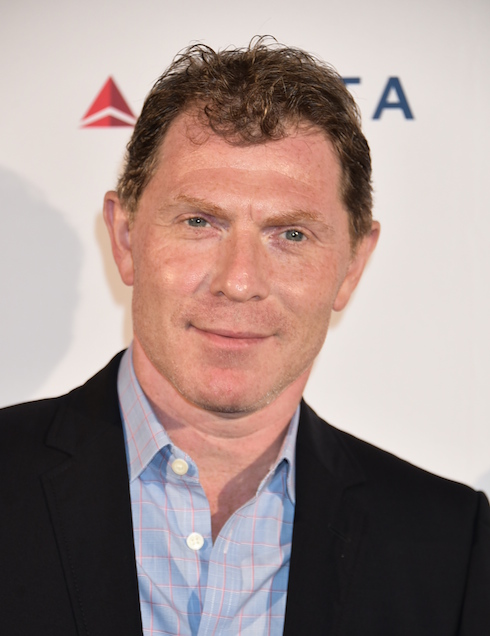 The “Bobby Flay naked dancers” fiasco has gone viral–probably because people can’t figure out exactly what in the heck happened to Flay at the New York Food and Wine festival this past weekend. The Times Square Desnudas, a group of topless women who pose for photos and sometimes dance with tourists, were hired to parade past Flay with the word “Cheater!” emblazoned on each of their chests.

Flay has been subjected to public outrage over his nasty divorce from ex-wife Stephanie March on several occasions since the many cheating allegations against him went public. Most notably, he was buzzed by a plane bearing a “CHEATER” banner while receiving a star on the Hollywood Walk of Fame this past summer. But the Bobby Flay naked dancers have caused an internet sensation–in large part because the smiling ladies refuse to dish on who hired them, or why, specifically, they were hired.

Chris Oliveri, 25, who manages the Times Square Desnudas, told the New York Post “I was paid a lot of money not to say anything.” 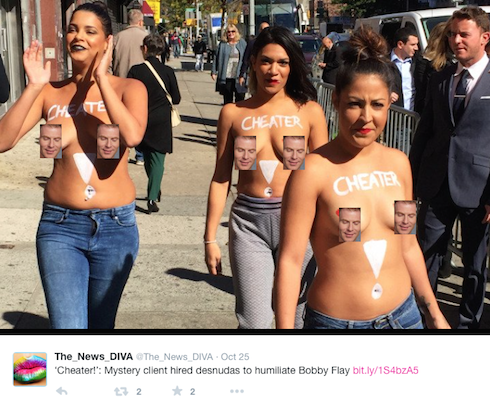 Deborah Lans, Stephanie March’s attorney, said she has no idea who was behind the Bobby Flay naked dancers, but that she seriously doubts it was her client. “I’m quite sure Stephanie had nothing to do with this,” Lans told the Post. “My personal speculation is that it could have been any of the disaffected people in [Bobby’s] world.”

Caylee Anthony’s grandparents reportedly sold their granddaughters toys in a garage sale. Should they have done that?