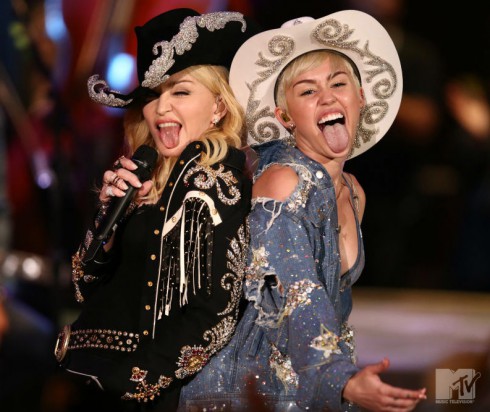 The internet was all abuzz with rumors that Madonna would be joining Miley Cyrus on stage for the “Miley Cyrus Unplugged” special airing Wednesday night on MTV, and the rumors turned out to be true! Miley and the Queen of Pop performed a duet medley of Madonna’s “Don’t Tell Me” and Miley’s “We Can’t Stop” that was, according to numerous tweets from those in attendance, life-alteringly amazing!

Madonna shared the black-and-white photo below with Miley on instagram and captioned it, “M &M ! Don”t ever Tell us We Can’t STOP! #revolutionoflove” Miley later tweeted it too and wrote, “ITS WE WHO BOUT THAT LIFE! ❤❤❤❤❤” As you can tell from the photo, Madonna was sporting some rather ornate attire including a hat with Miley going with a sparkly denim look. As you can tell from the photo at the top of this post (courtesy of MTV), Madonna’s outfit was black and white and Miley’s was the denim blue you would expect. 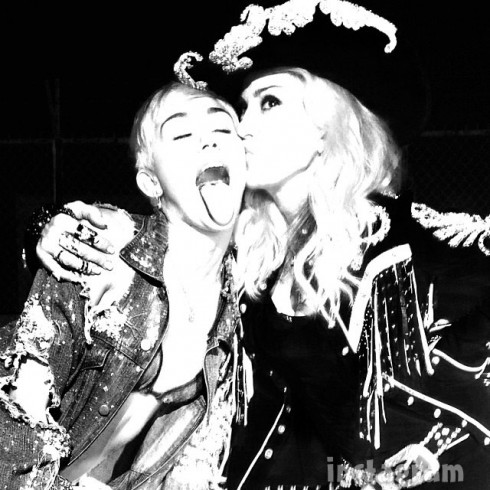 As far as the performance, the two singers reportedly did two takes of the song, and of course there was a good bit of flirtatious interaction between the duo, “with Miley even playfully slapping Madonna’s bum a few times during the two takes,” according to E! Online.

“That was pretty f–king cool, you guys,” Cyrus reportedly said to the crowd after. “It sounds super-lame, but as a pop star it’s pretty cool performing with Madonna…Today was one of those days that it was really easy to get out of bed.” 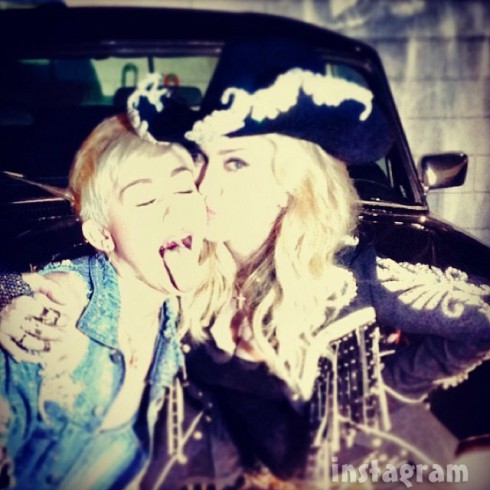 Cell phones were not allowed into the venue, and judging from comments on Twitter, the policy was strictly enforced. So we don’t have any audience photos or videos of Miley’s Unplugged concert, but we do know some of the songs Miley performed. Here is a list of the songs multiple sources are confirming that Miley performed, although that does not guarantee they will be on the “Miley Cyrus Umplugged” special:

Rooting For My Baby

Miley also performed a cover of Dolly Parton’s “Jolene” that was apparently another crowd favorite.

A couple other relative tweets:

Also, fun fact. They warmed up the crowd at Miley unplugged with Selena Gomez’s Slow Down

Did death of Miley Cyrus’ dog lead to her hospitalization?