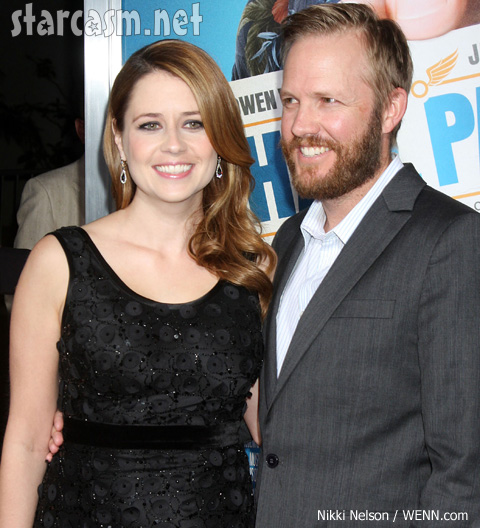 Not really Pam. Jenna Fischer, the actress who plays Pam, is pregnant, but to be fair Jenna even goes by the name Pam first on her MySpace profile.

Fischer is expecting her first child with husband Lee Kirk, who she married last July. Jenna’s pregnancy started to show just in time for The Office to wrap for the summer hiatus. That means the writers/directors/ and Jenna don’t have to work overtime like in 2007 when co-star Angelina Kinsey had hide her body behind desks, plants; and used mostly head close-ups when she was expecting. Angelina was very pregnant during a storyline in which she was proposed to, and got caught cheating with Dwight.

Kirk actually appeared in an episode of The Office in “The Delivery: Part 2,” which features Jenna’s character Pam Beesly giving birth to baby Cecelia (CeCe) with husband Jim Halpert. Kirk is also the screenwriter and director for the upcoming film The Giant Mechanical Man, which happens to star Jenna and is due out 2012. The pair have been dating since 2008.

Jenna was previously married to James Gunn for seven years (2000-07.) She recently told Redbook that the birth of her niece got her infected with baby fever. Her baby niece was born on the same day Jenna shot labor and delivery scenes for The Office. Jenna convinced the show’s writers to name Pam and Jim’s baby after her niece, Cecelia, and then got an extra gift. Pam went on maternity leave, so Jenna had a week off to bond with the real Cece.

“I already wanted kids, but even more so now. When Cecelia was 3 weeks old, Pam was on maternity leave, so I had a whole week off to spend with her. I took charge of the night feedings. It was so awesome: Every night at 9:30, I’d say, ‘You guys go to sleep now.’ I wanted CeCe all to myself. We really bonded.”