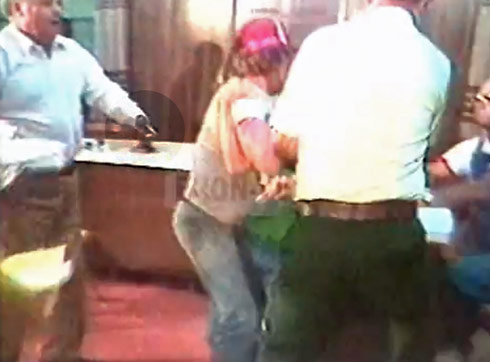 Famed documentary filmmaker Errol Morris’ 2nd feature, Vernon, Florida, was released in 1981. The work, featuring interviews with some eccentric citizens of the Northwest Florida town from which the film was named, has since become an underground classic. It turns out that the backstory of what led Morris to Vernon is arguably more fascinating than the townspeople highlighted in the film.

His [Morris] approach is diabolically simple. He places them in their environment and listens to them. They talk of their dreams, superstitions, fantasies and lifetimes. In the measured words of the old man, speculating on what a turtle must be thinking about, we hear a condensed philosophy of life…

Here’s the trailer for a taste of the hypnotic, straight-forward storytelling that is Vernon, Florida:

In an interview with The 7th Avenue Project, the man behind classic documentaries such as The Thin Blue Line and The Fog of War revealed how a newspaper blurb about a town called “Nub City” piqued his interest:

“I’d gone down to make a movie about a clipping that had appeared in the New York Times Sunday Magazine. It was an article about an insurance investigator talking about the worst cases in his career and he mentioned Nub City. It was a place in Northwest Florida where there had been this extraordinary history of self-mutilation. People had been cutting off their arms and legs after taking out insurance policies. I thought, ‘Good God. I should find out more about this place.'”

Morris went on to reveal that he sought out and visited the investigator in question. His name was John J. Healy and after some prodding the man finally told Morris the name of the town but sternly cautioned him not to visit – warning that it was a very dangerous place to be snooping around.

The director ignored the advice and made his way to Vernon where he wound up living and filming for nearly a year. 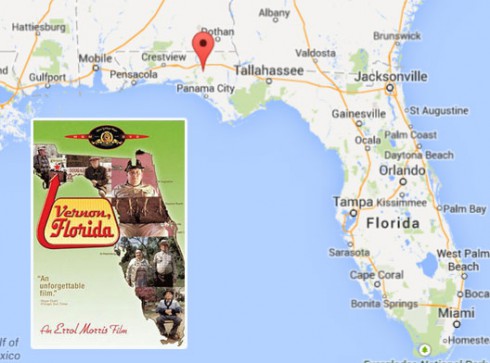 Not long after pursuing the topic, Morris learned first hand about the dangers he was warned of. When asked why he dropped the idea of doing a feature about these self amputations, he provided the following anecdote:

“I knocked on the door of a double-amputee, who was missing an arm and a leg on opposite sides of the body – the preferred technique so that you could use a crutch. His buff son-in-law, a Marine, beat me up. I decided whatever I was doing was really, really stupid and dangerous.”

Morris claims via his official website to have received death threats as well. All of this was enough to convince him to take the work in a different direction.

In a fantastic piece by Thomas Lake for the Tampa Bay Times, greater detail was provided on just how pervasive this purposeful limb removing was:

Lake points out that more than two-thirds of all loss-of-limb claims in the late 50s and early 60s in the United States came from the panhandle of Florida.

In 1984 Vernon once again gained regional notoriety when a bloody brawl broke out during the discussion of possibly firing the town’s only policeman at a city council meeting. The madness was caught on video by a reporter from WMBB out of Panama City.

The clip in and of itself is amazing enough but it’s what the old man who’s caught up in the ruckus is missing that ties all of this together:

Yep. You saw that right. The man had a hook for a hand and it wasn’t by accident.

The woman you see in the video with the towering dark hair who started the dust-up, as pointed out in the TBT report and in the video, was City Councilwoman Narvel Armstrong. The barefoot guy laying a whooping on the teacher is Narvel’s son Coleman. And the man without one hand? Well that was Narvel’s late husband J.C. Armstrong.

When Narvel was asked by a reporter how her husband had lost his hand she replied, “I think you know.”

All in all nearly 50 men, later referred to as the “Nub Club,” in and around Vernon collected insurance for these “accidents.” No one was ever convicted of fraud in these cases but all the attention combined with many of the insurance companies’ refusal to sell those types of policies brought an eventual end to all the hackneyed hacking off of body parts for profit.

Narvel Armstrong was reelected to her spot on the council by the denizens of Vernon, Florida.