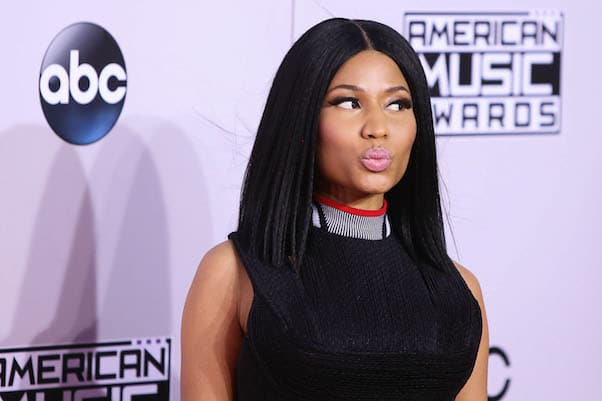 LAINEY GOSSIP – She made the announcement out of nowhere, then quickly tried to play it down — but is Nicki Minaj retired for real, or is she just planning a short (pregnancy) break? Nicki claims she’s going to be “talking about everything” on Queen Radio, so we probably don’t have too long to wait before finding out some of what she’s got planned

JEZEBEL – The Good Place‘s fourth and final season premieres September 26th at 9 PM on NBC. The first teaser trailer for the new season is here; it’s light on new material (as any good teaser trailer should be), but you’ll never think about JFK’s assassination the same way again

DLISTED – Kevin Hart is said to be “excruciating pain as he heals” from the major back injuries he suffered in a car accident last week — but he is apparently walking again. Hart began physical therapy last week, has months of the same ahead of him, and is “maintaining a relatively positive mood”

VOX – It seems America’s current president has been making the military stop over at his Scottish golf resort while on the way back from anywhere within (literally) a thousand or so miles of the place. In addition to making for inefficient travel, the stops also cost taxpayers more than layovers at the usual spots — to the tune of $11 million and counting in fuel alone

CELEBITCHY – Definitely not going to top this headline: “Prince Andrew was still getting rides on the Lolita Express after Epstein’s 2006 arrest”

REALITY TEA – “This season of The Real Housewives of Potomac is coming to a close, and my heart can’t take it. I never want this season to end. From start to finish, it’s been a breakout season in every possible way.”

THE BLEMISH – Just to play Devil’s Advocate: At what point over the last few years of Michael Jackson’s life could he have said he believed someone was trying to kill him and *not* had it written off as simple paranoia?

THE BLAST – J. Lo’s clutch wasn’t “literally” $10,000 in cash at the Hustlers premiere, but it was impressive nonetheless

GO FUG YOURSELF – Come for the half-handsome, half-brooding madman pictures of Bill Skarsgard; stay for lines like these: “Here, Bill is the photo of your beloved that you kept in your locket during the war, ever since that day he hopped on that train and leaned out the window and held up a farewell hand while you waved your hanky”

THE ASHLEY’S REALITY ROUNDUP – I lost count of how many times I forgot Flip or Flop star Christina Antstead was pregnant during her actual pregnancy; now that she’s given birth to a healthy baby boy (congrats!) I look forward to many years of trying to remember that she actually has a child