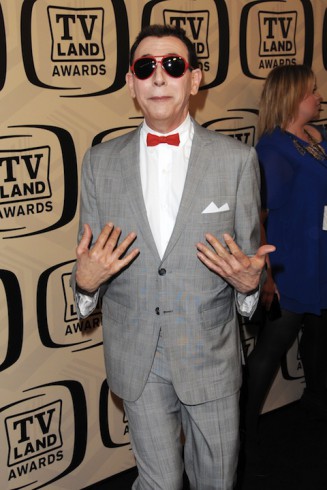 Paul Reubens has not had a starring role as Pee Wee Herman since Pee-Wee’s Playhouse went off the air in 1990. Since then, he’s revived the character every now and again for the occasional short film tied in to some other, larger purpose; or, during a brief stretch in 2011, Jimmy Fallon’s late-night program. But Netflix has the best demographic analysts money can buy, and they want a new Pee-Wee movie, so a new Pee-Wee movie we shall get: the streaming service has announced Pee-Wee’s Big Holiday, an all-new creation set to begin filming early this year.

Lynne Marie Stewart, who played Miss Yvonne during the Playhouse run, will reprise that role; John Paragon is coming back as Jambi. Lawrence Fishburne is rumored to be in line for the role of Cowboy Curtis. Perhaps the only distressing point for long-time Pee-Wee fans, then, is that Judd Apatow is on board to produce.

But why start watching for clouds? Here’s the broad plot synopsis, per the folks at Netflix: “A fateful meeting with a mysterious stranger inspires Pee-wee to take his first-ever holiday in an epic story of friendship and destiny.” They must mean ‘holiday’ in the sense of ‘vacation,’ right? Because back in the day, Pee-Wee had Christmas specials galore. At the same time, though, Pee-Wee’s Big Adventure was nothing but one giant vacation…so maybe this is going to be more like how the Muppets reboot had almost exactly the same plot as the 2002 made-for-TV special It’s a Very Merry Muppet Christmas Movie, which almost nobody saw, and so who cares.

What do you guys think? Are you excited for the grand return of the Pee-ster? Reubens is 62–are you interested to see an old Herman, or frightened at what might appear?