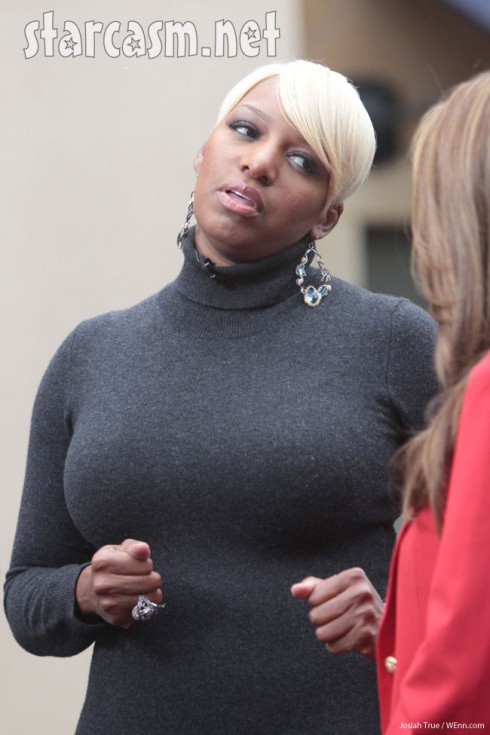 There was a surreal clip on Real Housewives of Atlanta season 5, episode 1 Sunday night with Miss Nene Leakes having dinner with television phenom Ryan Murphy. Nene’s a legit television actress now thanks to Murphy, getting her start with Glee, and now The New Normal.

Nene and Ryan really seem to get along well, and at some point discuss their affection for another entertainment powerhorse, Tyler Perry. Nene exclaims that she should give him a call, but it sounds like the number has been disconnected. Nene seems genuinely surprised at the time, but now she says that not only does she have Tyler Perry’s number now, but that was the correct number then!

It was correct then [laughs]. He has this on his phone, this crazy silly voicemail that goes [in a high-pitched voice] Doo doo doooo. The number you have reached has been disconnected. It’s just something he has on his phone, but that is his phone number.

Not only does Nene have his number, but they’re practically BFFs. She says they talk every week, and he advises her about her career. Even so, he still hasn’t offered a role in any of his movies.

We talk all the time. At least every week I talk to Tyler. We both live out in Atlanta. He usually advises me, he’s like a mentor to me. We’re really good friends. He just advises me on the industry. He’s just regular like me. We talk about all kinds of stuff, even if we’re not talking about the industry, and we laugh all the time. He’s super hilarious. He saw that episode, too, and he texted me, “This is so funny.” Wherever he goes, people are going to be asking him, “Do you really know NeNe?” And he’s gonna be like, “Absolutely.”

I would love to work with Tyler, however, we’re friends. So whenever we’re talking about anything, I never say, “Oh, let me be in your film,” or anything like that. I figure he knows me, he knows I’m an actress. Whenever he feels he wants to, he will. If he doesn’t, that’s fine too. Sometimes when friends work together, the friendship don’t last. I’m okay if we do or don’t.

Nene also addressed rumors that she’s going to be leaving the show soon. While she doesn’t expect the show, or her time on it to last forever, Nene says she has zero plans for leaving right now. Guess this girl can handle reality television AND fictionalized television at the same time. In the end, there may not be much of a difference between the two.