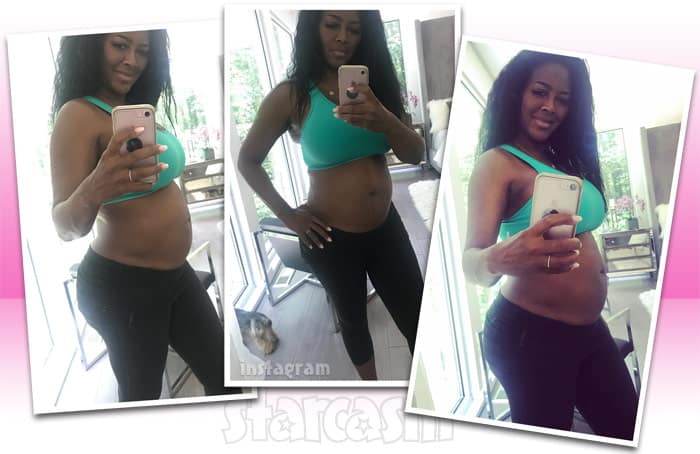 Pregnant Real Housewives of Atlanta star Kenya Moore has FINALLY revealed her bare baby bump in a series of photos and even a video — seemingly putting all those fake pregnancy rumors to rest once and for all.

“#BabyDaly is growing!” Kenya began the caption to her gallery of bare bump selfies. “I’m feeling much better now and baby is giving me amazing skin and I’m not having crazy cravings. Actually, I’m eating less bc baby is moving up.”

The 47-year-old first time mom-to-be goes on to reveal that everything seems to be great health-wise. “So far all the tests and ultrasounds say baby is healthy!” she writes, adding: “Thank God. Please continue to pray for our family!”

In addition to the photo gallery, Kenya uploaded a similar baby bump selfie video clip to her Instagram story. Here’s the clip as re-shared by another account:

And a couple screen grabs from the original video: 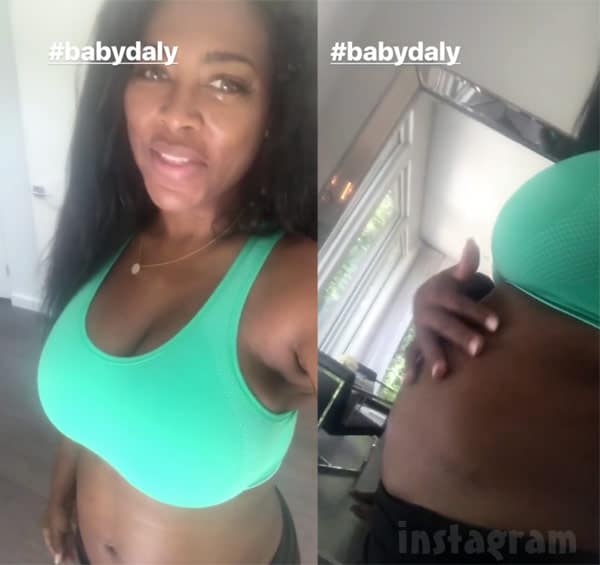 “Hey everybody! Just checking in with you guys to show you my baby bump,” Kenya says in the clip, as she pans down to show her belly. “Yes! It’s getting up there!” Kenya then heads off any critics who might suggest the size of her belly is a bit small given that she announced her pregnancy on The Real Housewives of Atlanta Reunion, which was taped back in March. “Some of you might say it’s little, but c’mon — I was little before,” Kenya says as she laughs.

While some might say that Kenya’s baby bump is little, she has other body parts affected by the pregnancy that I don’t believe anyone would consider little. Kenya posted a photo while shopping for a 38DDD bra on Instagram and wrote: “Current bra size this week ?”

One thing that may actually be little for Kenya is her Bravo paycheck. The reports continue to pour in that she will not be returning for another season of The Real Housewives of Atlanta, with the latest reputable news source confirming her departure being Page Six.

An insider tells the site that producers “offered her [a] part-time [role] and she didn’t want the reduction in pay. So she’s out.” Kenya has continued to deny the firing reports, calling them “fake news” on her Instagram account. Of course, there is still the possibility that she is eyeing some sort of spin-off similar to Kim Zolciak-Biermann’s Tardy For the Party.

“Kenya has offers coming in left and right,” an insider revealed to Radar Online recently. “She’s looking into doing a pregnancy special and possibly getting her own show afterward.”

Kenya boasted on Instagram that fans will be seeing her pregnancy and birth no matter what. “Don’t worry #teamtwirl you will get to see #babytwirl and all that I’m experiencing as a new wife and mother-to-be one way or another,” she wrote. “You will see my raw truth… the good the bad and the ugly one way or another. Fact# I am good effing TV! Fact# I will be a HW or nothing at all.”

Do you think Kenya’s abundance of self confidence is merited? Would you tune in for a Life Twirls On Kenya Moore pregnancy special and follow up reality series?

Anyways… Congratulations to Kenya! And mad props to her for stringing along fans and the media with all the vague pregnancy updates that allowed the fake pregnancy rumor mill to keep churning. It’s all about those headlines y’all — especially if you’re in negotiations with a network about your reality show contract!