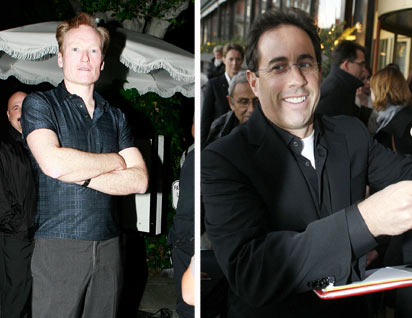 PopEater claims that NBC is ready to drop Conan O’Brien after only a few months on The Tonight Show! Not only that, but they also might shopping around for Jerry Seinfeld.

“NBC just can’t carry on like this. ‘The Tonight Show’ has lost 52 percent of its viewership in just one year. The November ratings will be the show’s lowest in 15 years. They would be idiots to not be having the replacement conversation,” an inside source told PopEater’s Rob Shuter.

TV’s a cutthroat industry, but Conan’s poor ratings aren’t entirely his fault. He’s been up against the controversy machine that is David Letterman, who has not only had a largely publicized row with former Alaska Governor Sarah Palin, but also threw in his explosive exhortion/sex scandal over two months ago.

Hopefully NBC will show a little patience with CoCo and not make any hasty decisions that might cripple his career as well as the reputation of The Tonight Show. When O’Brien first entered the Late Night frenzy as David Letterman’s successor to the NBC Late Night show it took him about three years of poor ratings and harsh criticism to establish himself. I’m not saying NBC needs to give him three years, but they need to allow him and his staff the opportunity to try to win over the hour-earlier viewers.

That being said, a Jerry Seinfeld talk show would be nearly impossible for NBC – dead last in the network wars – to pass on! Personally I think Seinfeld’s maximum potential was reached writing for and portraying the title character in the infamous “show about nothing” and I doubt his abilities to keep conversations with the likes of Captain Sullenberger, 7th grade science fair winners and Barack Obama consistently entertaining and funny.

NBC is currently denying that Conan will be fired with NBC spokesperson Drew Shane saying the rumors are “Completely false. There are no conversations happening. Conan is the host of the ‘Tonight Show.'”