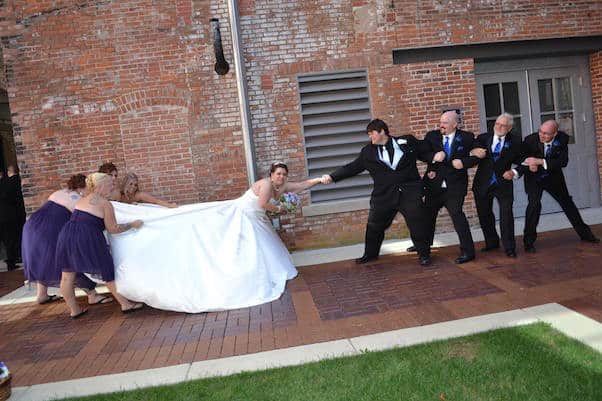 Last week, Starcasm broke the news of My 600 Lb Life star Joe Wexler’s surprise divorce from his wife Sarah, who Joe married on-camera in August of 2016 for his most recent Where Are They Now? follow-up episode. But Sarah disagreed with her now-ex-husband’s version of events, and she reached out to us to give her side of the story. In this My 600 Lb Life Joe’s wife exclusive, Sarah Wexler told us that Joe was distant and manipulative for so long — approximately a full year — that she simply reached her breaking point and “mentally gave up” on the couple’s marriage. Sarah also described a physical encounter that left her with what she called “PTSD” and visible bruises.

Joe first revealed the couple’s divorce a few weeks ago. Initially, Joe was somewhat light on details, saying only that Sarah had “decided she needed to step out of our marriage vows” and he filed for divorce as a result. Joe explained that the divorce led him away from Sarah’s home state of Iowa and back to his native Tennessee. Joe also said that he’d been “going through a lot of depression lately with the whole divorce thing,” which led him to “[eat] his emotions” and regain some of the 505 pounds he lost over the course of his three My 600 Lb Life episodes.

Last week, Joe updated his fan-specific Facebook page with another explanation of he and Sarah’s divorce. This time, Joe added details about Sarah’s affair, suggesting that she had flaunted her new relationship before Joe had left the state for good:

What’s worse is the affair was so bad, that while my best friend was helping me move out of my house so I could come back to TN, she moved her new boyfriend in with a new bed and everything. What’s worse is she says it was a mistake and wishes she could take it all back, but yet she is living with the dude and still sleeping with him. Yes, I am bitter at it but only because I gave my all to it and I was loyal to her, but it wasn’t enough.

But, according to My 600 Lb Life Joe’s wife Sarah, there’s a lot more to the couple’s divorce than what Joe has shared. Sarah described for us a months-long pattern of passive-aggressive behavior on Joe’s part, saying that he would “threaten to divorce Sarah” — well before her affair, which she admitted to — in order to win arguments with her.

For “six months to a year,” Sarah said, Joe “pushed [her] away,” ignoring or rebuffing her attempts to get both of them “in better shape with different ideas….I asked him for months to go with me walking, swimming, to Planet Fitness,” Sarah told us. “Finally I just said will you go and just support me and cheer me on.” In fact, it was at the gym that Sarah grew close to Trevor, her former co-worker, current partner, and the man with whom she had an affair.

“That’s why Trevor and I started to hang out,” Sarah explained. “We both wanted to lose weight….My ‘affair’ was a result of months of rejection by Joe with a guy who I worked with and was a good friend of mine who was supportive.”

When Joe objected to Sarah spending time with Trevor, Sarah offered to cut off the then-friendship completely. “I told Joe I would stop speaking to Trevor,” Sarah said, “go seek counseling and even get rid of my phone to fix our marriage.” Trevor, too, had apparently made peace with the idea of no longer calling Sarah a friend; when she told him about Joe’s reaction, and that she “wanted to fix [her] marriage,” Trevor responded that “he was happy to stop talking to” Sarah, despite their “apparent chemistry,” if it was what she wanted.

But the marriage continued to deteriorate, and the situation even got physical. Sarah revealed that not long before Joe began moving out, he “cornered” Sarah and “pushed [her] down in the bathtub” to try and get her phone away from her. Not wanting to “make a bad thing worse,” Sarah said she chose to spend the night in a hotel rather than call the police. The encounter left her with visible bruises, something Sarah was forced to explain to at least one person.

Here’s the My 600 Lb Life Joe’s wife response from Sarah Wexler in full:

I havent commented on my divorce except to family since it was agreed between Joe and I not to. He agreed he wouldn’t take our divorce public that it wasn’t anyone’s business, which is why I haven’t either. For the record, Joe threatened me for a year to divorce me anytime we had a disagreement, he pushed me away for about 6 months to a year as well. I would try to motivate him to walk with me or go with even as a support for MONTHS. I tried to get us both in better shape with different ideas, even swimming. I asked him for months to go with me walking, swimming, to Planet Fitness. Finally I just said will you go and just support me and cheer me on. That’s why Trevor and I started to hang out we both wanted to lose weight. We worked together almost a year prior.

My “affair” was a result of months of rejection by Joe with a guy who I worked with and was a good friend of mine who was supportive. I told Trevor I wanted to fix my marriage to which he was happy to stop talking to me, he was a good friend that apparently there was chemistry. I told Joe I would stop speaking to Trevor, go seek counseling and even get rid of my phone to fix our marriage. One night it got so bad when I was home before Joe left. He cornered me in the bathroom, pushed me down in the bathtub with his body and caused PTSD trying to grab my phone to see who I was talking to. Instead of calling the cops I went to a hotel with a friend to not make a bad thing worse and it left me with bruises for a week. I had to explain to my boss what happened which is embarrassing.

I’m not perfect however neither was he. I admit my choices and that it wasn’t the best thing to do. I am also the one who offered to do whatever it took to work on our marriage. I have over 100 emails of me begging him to stay that I would do whatever I had to. I was not a villain, I could only take so much before I mentally gave up. I have high anxiety and a counselor I used to see regularly to help me however I wasn’t seeing her for some time while this all transpired. I wanted to work things out with Joe. I never meant to hurt him, you can only be told something so many times before you give up.

He always said I took him away from his family I honestly feel like he missed home and found an excuse to leave. He always mentioned how he left his family for me to make me feel guilty for him leaving even though he would state at happy times there was nothing at home for him. Joe also knew [Trevor] was moving in to help me financially. He was supposed to have been moved out when I had planned to move MY bed into my home. I also kept my name due to my CNA license and certification.

As for Joe’s divorce- and depression-related weight gain, Sarah further claimed that it actually began much earlier, and for an unrelated reason. Joe “gained weight after his last surgery with Dr Now turned into an infection which he is blaming on me,” Sarah told us.

Since our articles about Joe and Sarah’s divorce, Joe has made only one public comment on the matter. In response to a posting of our second article in a My 600 Lb Life fan group, Joe wrote, “I’m fine everyone. Thank you for the kind words of support and faith. It’s hard to deal with it some days but I know I did all I could and in the end she has to answer for her broken marriage vows. Much love to you all.”

Joe was also asked if he had taken “the role of being [Sarah’s] child’s father and all” during his marriage to Sarah. (Before marrying Joe, Sarah had a child from an earlier relationship.) “Step dad,” Joe replied, “and yes I did. [Sarah] will get hers though. I’ve moved on.”