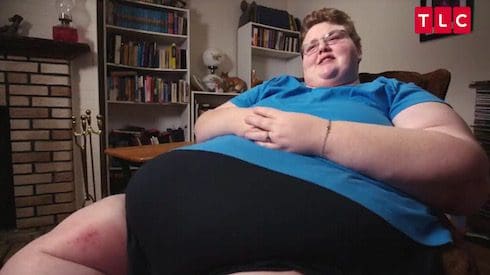 My 600 Lb Life Season 7 has been an optimistic one for the show, with plenty of positive cast members and weight loss journeys to root for. But tonight, Georgia native Holly Hager presents perhaps the most difficult challenge yet. In the My 600 Lb Life Holly episode, we meet a woman who’s already suffered a failed weight loss surgery — one that, in turn, came about because of a failed marriage.

As Holly herself explains in the teaser for her episode, she’s turned to food several times in her life to help get her through traumatic situations. And her first marriage was one such time. “My weight got up to 600 [pounds] by the time I was 30,” Holly says, adding, “At that point I had finally decided that my life was getting so bad that I had to do something — or it just wasn’t going to last much longer.”

Holly goes on to explain that her first husband “was the first guy [she] had trusted,” but, over the course of their ten-year marriage, she came to feel “like he had betrayed that trust with how he had treated her.”

Holly got a divorce — along with life-changing weight loss surgery. For a full year after she had her stomach stapled, Holly says she “started to really lose weight for the first time in [her] life”: She dropped from over 600 pounds to 398. But her success was short-lived. Though it had been “almost 20 years since [her weight] was down that low,” Holly soon began feeling intense food cravings once more.

“I started eating more, even when I was full,” Holly acknowledges. “I ended up busting my staples, and was back in the 500s again by the time I was 33.”

In addition, Monsters and Critics’ preview of the episode contains a bit more of Holly’s back story. Unfortunately, the reason Holly didn’t feel like she could trust a man until she met her first husband is that she was raped at the age of sixteen.

Before that, it seems Holly grew up feeling somewhat distant from her parents; their staunch Christianity and belief in “turning the other cheek” in every instance meant that Holly “never felt she could go to them with her problems.” Finally, Holly’s parents both worked full-time throughout her childhood, and “the tension of just barely staying afloat” wore on their little girl.

My 600 Lb Life airs Wednesday nights at 8 on TLC. Once they’ve aired, new episodes are available for streaming via the show’s app and official web site.

Girl ‘born pregnant’ with twin fetuses — how does that happen?