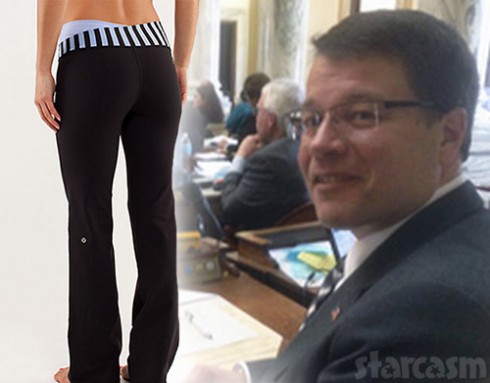 Because it will be silly to just expect him to avert his eyes, Montana state representative David Moore introduced legislation that would ban yoga pants, we well as tight swimsuits and bike shorts.

“Yoga pants should be illegal in public anyway,” Rep. Moore (R-Missoula) told The Billings Gazette after announcing House Bill 365. He added he wouldn’t have a problem with people getting arrested for wearing clothing that “give the appearance or simulate a person’s buttocks, genitals, pelvic area or female nipple.”

Rep. Moore said he drafted the bill after last summer’s Bare as you Dare bicycle event, which saw some completely nude participates ride through Missoula. The bill takes specific aim against “tight-fitting beige clothing” and would reclassify the wearing of such garments as indecent exposure, which is an offense potentially punishable by life in prison in Montana.

So far, there seems to be mixed feedback to House Bill 365. Walt Hill, a supporter who helped draft the bill, said he believes the bill will help protect Montana’s reputation. He explained, “I want Montana to be known as a decent state where people can live within the security of laws and protect their children and associates from degrading and indecent practices.”

However, Rep. Virginia Court (D-Billings) said she believes the bill is “a little prejudiced against women.”

Based on the comments from Montana residents, most agree the bill is unnecessary and a waste of time. Still, the debate about how appropriate yoga pants are seems to be growing: Just last month, a blogger’s post went viral when she vowed to stop wearing yoga pants in public because her husband confessed it was “hard not to look” at other women wearing the tight-fitting bottoms. She argued, “If a man wants to look, they are going to look, but why entice them? Is it possible that the thin, form-fitting yoga pants or leggings could make a married (or single) man look at a woman in a way he should only look at his wife?”