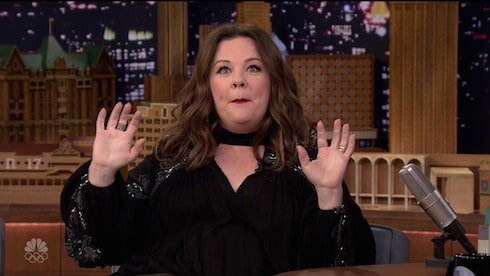 The Gilmore Girls cast for the Netflix reunion is finally set–and Sookie will return! Melissa McCarthy announced the unexpected news today, in conjunction with the release of the first pictures from the specials.

As we’d previously reported, McCarthy disappointed fans just a few weeks ago when she confirmed that she would not be a part of the Gilmore Girls cast later this year. According to her, it was just a simple miscommunication: “I didn’t actually get asked to do it….I think they thought I was busy,” she explained. “And then by the time it did come up, then I actually was.”

There didn’t appear to be any hard feelings, though: McCarthy went on to say she was “thrilled” the reunion was happening. “I loved that show, and I think the fans for that show are super loyal and great and I will watch every single one of [the new episodes],” she went on. “That was seven years of my life and it was really great. I was proud of that show.”

Of course, show creator and executive producer Amy Sherman-Palladino was quick to apologize for the mistake, and said that she’d be happy to accomodate McCarthy if the star had so much as a free afternoon. And, apparently, the two sides were able to figure things out, because Sookie St. James herself confirmed her return on Ellen!

TVLine was the first to break the news, which McCarthy dropped during today’s taping of tomorrow’s Ellen episode. In McCarthy’s own words:

There has been something that I have been asked about so, so many times and it hasn’t worked out and [that] is…they’re making four new movies of the Gilmore Girls, which is a show which was near and dear to my heart for four years. And we could not get those schedules to work. And there was a whole thing. And then I was gonna be out of the country and blah, blah, blah. And literally about an hour and half ago we figured out that I’m gonna go back and do it and I am so excited. And they are gonna be amazing.

“Amy Sherman-Palladino is gonna squeeze me in to do it,” McCarthy concluded, “and I’m just so excited to go back to Stars Hollow.”

Unfortunately, there’s still no official title for the four movies, though rumors have persisted that they will be collectively titled Gilmore Girls: Seasons. The movies are expected to be released late this year.