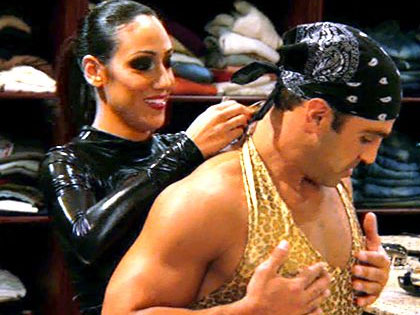 Melissa Gorga joins Kim Zolciak and Danielle Staub as a Real Housewife who has enjoyed a little bisexual action (Tamra Barney and Sonja Morgan have also insinuated they’ve tested the waters of “the lady pond” as Andy Cohen so quirkily puts it, and almost Housewive Fernanda Rocha is an out-and-proud lesbian.)

Apparently Melissa had a lesbian phase (making her possibly bisexual) when she was a teenager, and it was a little more than getting wasted on Smirnoff Ice and making out with the nearest girl.

Gorga’s former lover Jamie Bauer told The National Enquirer (via Pop on the Pop)all about their steamy romance, which lasted for more than a year.

“Melissa had one of the most insatiable sexual appetites I’d ever found in a woman. This domesticated family woman that fans see on ‘Bravo’ is definitely NOT the same wild child I used to share a bed with when we were younger.”

Sounds exciting, but I’m not sure how Melissa’s portrayal on RHNY naturally conflicts with a steamy fling in her youth. People are multi-faceted.
The biggest difference is that according to this lady she used to be insatiable, and now she’s a busy mom who’s sometimes too tired. She also has a husband who acts grumpy when he doesn’t get laid, and doesn’t mind telling Gorga on camera that he’s basically about to force her to have sex with him because she wears provocative clothing. Is romance dead?

UPDATE: Jamie Bauer’s friend also blabbed to star about Melissa’s lesbian relationship. Rhiannon Romero said their song was “I Love You Always Forever” by Donna Lewis and that it was Melissa’s “First love and long relationship. It was really passionate, and they were really in love.”