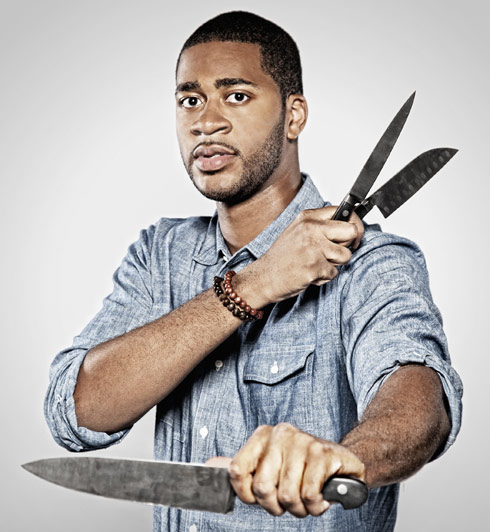 MasterChef Season 3 runner-up Josh Marks had a violent and extremely bizarre encounter with Chicago police, resulting in the 7’2″ tall culinary artist being subdued by 5 police officers and arrested.

On Monday, a University of Chicago cop spotted Marks on an emergency phone with cuts on his face. The cop asked Marks if anything was wrong and he lunged at him striking the cop in the face with a closed fist and making a move for his gun.

The cop and two other officers did their best to subdue Marks but were unsuccessful. The 26-year-old fled on foot even after being pepper sprayed. Eventually it took 5 cops to subdue Marks in a nearby backyard according to TMZ.

Marks was taken to a hospital to treat his injuries. When he was taken into custody he was asked by the authorities why he went ballistic and he explained that Gordon Ramsay, whom he called an “a**hole,” had possessed his body and made him God. There was no evidence of drug use.

As of this post, Marks remained chained to a hospital bed. He’s been booked on charges including assaulting a cop and resisting arrest.